To celebrate both the 30th anniversary of the original novel and the release of the new Hitch-Hiker's book, And Another Thing by Eoin Colfer, Pan Macmillan have re-released the original five Hitch-Hiker's Guide to the Galaxy novels in new covers. Most notable about this release is that The Hitch-Hiker's Guide to the Galaxy itself has a blank cover: you yourself can create the cover using a provided assortment of stickers. So if the cover sucks, it's your own fault!

The new editions also come with fresh new introductions by other writers, such as Russell T. Davies (outgoing producer of the new Doctor Who), Monty Pythoner Terry Jones and Neil Gaiman, and a host of rarely-seen publicity photos and press releases from the time of each book's release.

Tying in with the release of Kim Stanley Robinson's very fine Galileo's Dream, HarperCollins Voyager meanwhile are reissuing his classic Mars Trilogy in very nice new covers. Unfortunately, they are also in the larger 'B-format' paperbacks which I know many readers aren't too keen on. However, the books are so great to look at, it's worth the extra inconvenience of their bulky size. 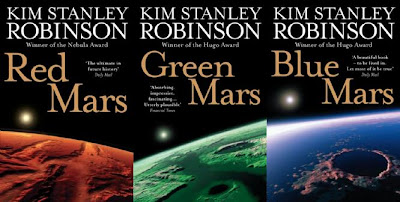 Both sets of book are available in the UK right now.
Posted by Adam Whitehead at 17:53

Email ThisBlogThis!Share to TwitterShare to FacebookShare to Pinterest
Labels: douglas adams, kim stanley robinson, the hitch-hiker's guide to the galaxy, the mars trilogy

The font used on the Mars Trilogy is terrible. Otherwise, nice covers.

Agree abut the font, I don't like it at all.

I tried Red Mars years ago and gave up half way through. Might have to dig out my old copy and give it another go someday soon.

not to spoil the party but do we really need another h2g2 book? I read the press release and Adams could have been facetious in suggesting the need for a 6th book. Did someone discover a secret lock box somewhere with a plot outline and the beginnings of a manuscript? Maybe the last volume was a bit dark but I can't imagine anyone but Adams doing it properly.