A man named Paxton Fettel has seized control of Armacham Technology Corporation headquarters, using a platoon of telepathically-controlled soldiers. A government agency dedicated to battling paranormal threats named F.E.A.R. (First Encounter Assault Recon) sends in its new 'point man' with a squad to stop Fettel. Instead, it's only the beginning of a night of murders, conspiracies, intrigue, mayhem and repeated, disturbing encounters with the image of a young girl in a red coat... 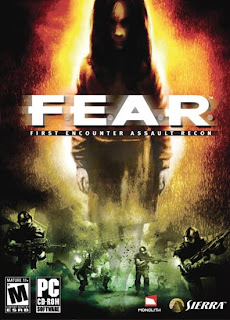 F.E.A.R. was released in 2005, during a mini-craze at the time for Japanese and Korean horror movies (and their American remakes), and the game shamelessly invokes some of the same imagery and ideas throughout its length. Effectively, F.E.A.R. is a first-person shooter with strong horror overtones. It doesn't entirely work successfully, although it has a fair old bash at the idea.

The thing about effective horror is that it preys on the fears of the audience, and to do that usually features a helpless or trapped protagonist. For example, the protagonist is usually an innocent, sometimes a child, rather than a fully-trained killing machine armed with railguns and automatic shotguns. Giving your main character an arsenal substantial enough to wipe out a small city and the ability to go into bullet time at will does tend to engender a feeling of invulnerability in the player, especially since the hallucinations and horrific imagery you encounters tend to be incorporeal, and after the first few 'shocking' horror sequences you suddenly realise that the game is never going to inflict serious damage on you during these sequences, and then they tend to become a little bit boring.

That's not to say that F.E.A.R. is unsatisfying or not worth playing. Combat is satisfyingly chunky and robust, the level design is interesting and clever in places (with some hub-like levels breaking up the linearity of the corridor shooter sections, although the latter does make up the majority of the games) and the weapons do their job well (oddly weak missiles excepted). Enemy AI is fairly robust, leading to some interesting and balletic shoot-outs, especially when combined with bullet-time. There's even a melee combat mode which is surprisingly effective, although you can go the whole game without ever using it. There's a distinct lack of variety in the enemies though. I counted about five types maximum, including the large mech-like boss things, and over the course of an eight-hour game, that does become a little repetitive and dull.

The plot is pretty good, and unfolds via telephone answer machine messages and laptops you find scattered throughout the game, as well as a couple of sequences where you meet NPCs. If the in-game 'psychologically disturbing' sequences lose their appeal early on and become predictable, the horror aspects of the actual story and the situation (which, as one character helpfully points out, is "Totally fucked up,") are altogether more satisfying.

The best thing about F.E.A.R. is the ending. Because the bulk of the game is a little bit on the predictable side (especially compared to some other shooters reviewed here, such as Far Cry or Half-Life 2), the ending when it comes is even more effective because everything goes haywire and most of the rules you've been playing the game under go out the window. Whilst some aspects of the end sequence are extremely annoying (hint: keep a shotgun fully-loaded for the end of the game), the sheer insanity of events is quite enjoyable, building to a series of final moments which are highly memorable (including something that, rather annoyingly, Call of Duty 4 got a lot of kudos for doing first, although F.E.A.R. did it three years earlier and in a much more impressive manner). And I defy anyone not to jump out of their chair in the game's final moments. It takes a while to get there, but F.E.A.R. does, at least, deliver a solid horror ending.

One criticism that has to be voiced is that between its office, building site and tenement environments, the slow-motion action and psychological horror aspects, the game does seem to be treading the same ground as Max Payne and Max Payne 2, and to be honest those two games were much better and more original (not to mention more darkly humorous) than F.E.A.R., which does make F.E.A.R. look a little weaker in comparison.

F.E.A.R. (***½) is a solid corridor shooter which invokes the horror genre to interesting effect, but arguably the bulk of the game doesn't live up to either the premise or the superb ending. It is decent enough and, thanks to its age, can probably be picked up quite cheaply these days. The game has two expansions, Extraction Point and Perseus Mandate, although these were 'de-canonised' by the original developers, who more recently delivered an official sequel named F.E.A.R. 2: Project Origin. F.E.A.R. is available now on the PC (UK, USA), X-Box 360 (UK, USA) and PlayStation 3 (UK, USA).
Posted by Adam Whitehead at 23:19

Email ThisBlogThis!Share to TwitterShare to FacebookShare to Pinterest
Labels: f.e.a.r.