In the 25th Century, huge corporations exploit the resources of distant worlds. One such world is Krig-7B, where the Crayven Corporation finds itself opposed by an army of religious fanatics, the Order of the New Dawn. As the two sides battle for control of the planet, the discovery of ancient 'xenofacts' puts a new spin on the conflict, and the discovery by the battlefield commanders of both forces that some in their ranks are engaged in their own agendas makes the war even more complex and multi-layered than first believed. 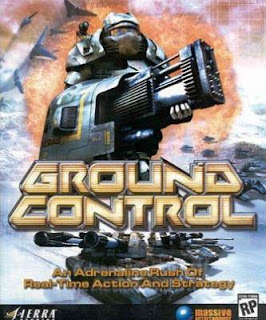 Ground Control was released in 2000 and is a relatively rare breed, a 'real-time tactics' game rather than a real-time strategy. The difference between the two is that in an RTS the player has control of resources and unit production (or reinforcements) whilst in an RTT the player has to make deal with what they have and cannot construct new units in-theatre. Some games, such as the Total War series, appeal to both by having a turn-based campaign map mode where units are constructed and assembled into armies and then a real-time battle mode where the battle is fought with the units that have been brought to the field, with no prospect of reinforcements arriving mid-battle (with some exceptions if there are other armies nearby when the battle starts).

Ground Control doesn't have that, although you do have some larger choices about the mission before it starts. You can customise your attack force and decide which units to take into the battle before dropping into the fray. The game is pretty hardcore though, as Massive Productions were unhappy with players simply quick-saving their way through battles in other games instead of deploying proper tactics so they simply dropped the ability to save mid-mission from the game. And considering some of the later maps can take up to an hour to finish, that's a pretty ballsy decision. To be honest, it works. Playing Ground Control is much like playing a Total War game, with intelligent decisions and tactical planning (but retaining flexibility to deal with changing circumstances on the battlefield) required rather than simply sending your army off willy-nilly and reloading if they happen to get wiped out.

The biggest surprise on playing this nine-year-old game is that visually it still looks pretty smart. Its 3D units are low-textured compared to modern games, sure, but are detailed enough to remain impressive (down to the individual soldiers' guns ejecting shell casings as they fire, and the tracked vehicles leaving churned-up trails across the battlefield). The game looked astonishing in 2000 and remains more than attractive enough to get the job done today. And, as with many of the older games I've recently reviewed on the blog, it's so old that even the more humble modern laptops should be able to run it with everything turned up to the maximum without breaking a sweat. In addition, I encountered zero problems on running it with XP on modern graphics cards, but I cannot speak to its compatibility with Vista.

As mentioned previously, the game is pretty hardcore and unforgiving of mistakes. The more powerful units, particularly the heavy artillery, are fully capable of wiping out your entire attack force in a few minutes if you blunder into an enemy position, chokepoint or crossfire area. As a result, careful deployment of recon or stealth units to map out your path is required. Later in the game the addition of aerial forces and high-speed scout aircraft makes this a lot easier (although additional precautions have to be taken: aircraft are highly vulnerable to ground AA fire and, unlike ground vehicles, cannot be repaired). Positioning and deployment of your forces is also critical, and in fact it is interesting to realise that you're putting your heavy armour at the front, lighter, faster forces on the flanks and heavy artillery and the command vehicle in the middle, almost as if this was a high-tech version of the Napoleonic Wars (albeit one with bombers capable of dropping small nuclear bombs roaring overhead).

The missions are challenging, although the learning curve is decent enough, and keep forcing you to re-evaluate tactics. For example, once you get artillery it initially appears that the game is essentially over, as you can sit a mile outside the enemy base and pound it to rubble. However, the deployment of enemy counter-battery units, fast intercept aircraft which can bomb your defenceless artillery (unless you have AA units) and so on keep you on your toes. Enemy AI is excellent, and does a good job of keeping you busy, especially on the harder difficulty settings. 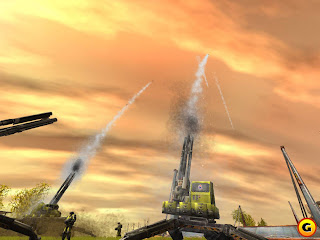 Ground Control's mobile artillery are the best artillery units ever seen in a game.
The storyline, although unlikely to win awards, is well-told and enjoyable to watch unfold. The music is excellent and the graphics engine is fantastic. Ground Control wasn't the first real-time combat game to use a fully-3D engine, but it was certainly the first one where you didn't spend half your time battling the camera controls as well as the enemy. In fact, Ground Control and its successor engines (the ones used in Ground Control II and World in Conflict) remain the finest 3D battlefield engines yet seen in the genre, and certainly put the much newer ones in the likes of Company of Heroes, Dawn of War, Command and Conquer III and so forth to shame. It also has the best user-interface of any RTS or RTT game I've encountered. The minimalist UI which allows the graphics to take up the bulk of the view is fantastic.

On the minus side of things, the primary problem is the lack of in-mission saving (although the game naturally does save after and before every mission). Whilst it does make you play the game in a much more logical manner, it isn't very forgiving if you suddenly realise you're about to miss a dentist's appointment 20 minutes into a long mission, forcing you to restart later from scratch. However, that hardcore element is part of the game's lasting appeal, and with the in-game saving it would be a far easier and more simplistic game. Another slight criticism is that aircraft are of dubious value (since you can't use them until your ground units have destroyed all AA forces in an area, and by that time you've pretty much won anyway) and that the two sides are pretty much just reskins of one another, with only a couple of unique units.

Ground Control also comes packaged with its expansion, Dark Conspiracy. Dark Conspiracy furthers the story of the war and its characters in an consistently interesting and entertaining manner. The expansion also takes the war off Krig-7B to other worlds and introduces a new faction, the Phoenix Mercenaries, who have very different vehicles, weapons and tactics to the existing two sides. There are also some interesting and original new maps, such as airless moons and other planetary environments. However, the expansion isn't quite as well paced as the original game and its later levels are astonishingly rock hard, to the point of frustration which the original game just about avoids.

Still, Ground Control (*****) is an excellent tactical game that rewards careful consideration of the battlefield and due attention to military tactics and unit capabilities. It is perhaps not as tolerant of casual players as some other real-time strategy/tactics games, but making the battles more challenging is part of its appeal. It is available now (for £4!) in the UK and (for the truly ridiculous price of $40: what the heck?) in the USA. Far more preferably, the game is actually available for legal, free download from here, although I have no idea if it works any more. If not try here, where it is available for $6 with the expansion, which notably is not included in the free download pack.
Posted by Adam Whitehead at 22:48

I downloaded the free version of Ground Control from Fileplanet a couple of months back and it worked fine then.