Young Guybrush Threepwood arrives on Melee Island with just one ambition: to become a pirate! Unfortunately, to prove himself he must undertake three challenging missions for the pirate leaders. Along the way, he meets and falls in love with Governor Elaine Marley and earns the ire of the ghost pirate LeChuck, leading him into a search for the fabled Secret of Monkey Island (TM). 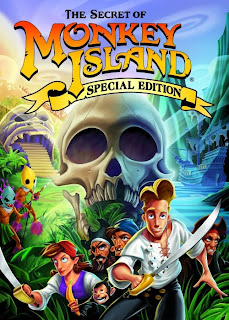 Back in the late 1980s, Lucasfilm Games (later LucasArts) joined Sierra as one of the companies determined to life the adventure game out of the text-driven environment. With animated graphics, fiendish puzzles and a genuine sense of humour, the first three games Lucasfilm developed with the 'SCUMM' interface became classics of the genre: Maniac Mansion, Zak McKraken and the Alien Mindbenders and Indiana Jones and the Last Crusade. For the fourth game, and employing a streamlined interface and better graphics, veteran designers Ron Gilbert, Tim Schafer and Dave Grossman decided to make a game about pirates, inspired by Disney's 'Pirates of the Carribbean' ride and by Tim Powers' novel, On Stranger Tides. Mixing traditional pirate lore with a great sense of humour and an injection of the supernatural, The Secret of Monkey Island became, almost instantly, Lucasfilm's most successful adventure game, bettered only two years later by the arrival of Monkey Island II: LeChuck's Revenge.

For the purposes of this review I purchased the newly-released 'Special Edition' of the game, available for the PC and X-Box 360. This new edition of the game is an enhanced remake of the original. It is incredibly faithful, employing all of the original game's puzzles, locations and characters, but the low-res original artwork has been replaced by hi-def graphics and the MIDI music score has been completely reworked by the original composer into a high-quality orchestral soundtrack. All of the dialogue in the game is also now fully voiced by the same cast who have worked on the series from Curse of Monkey Island onwards. Aware that grumpy old-school fans might get irate with the game looking 'too good', LucasArts have included a very nice feature: at any time, a nudge of the controller or hitting F10 will instantaneously swap the 2009 graphics for the old-school VGA graphics, and the sound and music will be likewise swapped out for the original equivalents. 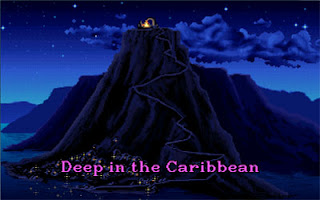 In its own way, as iconic as that blockade runner and Star Destroyer screaming overhead.
I haven't played the game through from start to finish for about fifteen years, so was surprised at how many of the game's puzzles had seemingly lodged themselves in my brain (with one or two head-scratching exceptions). One of the reasons why Monkey Island fared so well on release was its unashamed non-hardcore, newbie-friendly status. In all the earlier SCUMM games, characters could die and in a few places the game could be 'broken', where the failure to pick up the right item an hour earlier led to it being impossible to progress any further. Monkey Island has no truck with that at all. Your character is never in a truly life-threatening position, you can save the game at will and there is no part in the game where you are stuck and cannot progress any further, which was and remains very welcome.

The game's humour is still excellent and the new graphical style does work well, although I am broadly not in favour of the overtly cartoonish direction the series took after Monkey Island II. The voice work is also top-notch, with the exception of the actress playing Elaine, who is really not very good at all. The 'old-school' graphics mode is well-implemented, but it's so insanely low-res by modern gaming standards that it becomes uncomfortable playing with it for any length of time. Most irritating is that the original low-quality PC soundtrack is employed on the old-school version rather than the high-quality stereo music used on the Amiga version. You also can't match the old-school graphics with the new music (which is exactly the same as the old music, merely re-recorded at much higher quality with a proper orchestra) or mix the two versions up to any degree (such as mixing the old graphics with the new voice-overs), which is a shame. 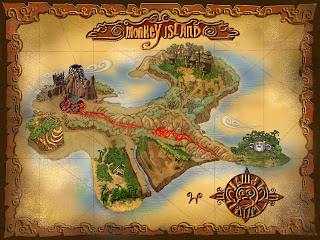 "That's the second-biggest monkey head I've ever seen!"
The most problematic aspect of the game is the interface which is annoyingly cumbersome. The original version of the game - the one released in 1990 remember - had all your commands and inventory on-screen at all times, and it was extremely easy to match commands with items in your inventory or on-screen, especially useful when you needed to combine two objects in your inventory to create a new one and then use that new item in the game world. The new version has decreed that that would make for too much sense. Instead you have a seperate item screen which you have to switch to and then back to the game world, sometimes needing to open the other screen several times to solve certain puzzles. It's insanely annoying and actually makes several puzzles considerably harder than in the original version of the game (to the point where switching to classic mode is recommended). Exactly why each successive game in the series after Monkey Island II uses an inferior interface to the one before it is one of the greatest mysteries of the Monkey Island series, and it is very annoying to seem LucasArts repeat the mistake in this remake of the original game (I strongly suspect it's down to the game's 360 version forcing a menu-driven system on the designers, but even so they could have found another way around it).

Still, it can be borne for this is still one of the funniest, smartest, well-characterised and just plain fun computer games ever made. An absolute bona-fide classic, and at the insanely low price of £6 for four hours or so of top-notch entertainment, there isn't really any excuse for not picking up this game.

The Secret of Monkey Island (****½) is available now for legal download on PC and X-Box 360. LucasArts and Telltale Games are also releasing an episodic series of new games in the series, called Monkey Island Tales, with the first two available now. According to LucasArts, if this first remake is successful they will strongly consider a similar relaunch of Monkey Island II, which has a viable claim to being one of the very best computer games ever made for any system ever, and thus it must happen :-)
Posted by Adam Whitehead at 00:58

Email ThisBlogThis!Share to TwitterShare to FacebookShare to Pinterest
Labels: the secret of monkey island, wertzone classics

I've been seriously considering finally playing this game. Have you played The Longest Journey? I just played it and thought it aged rather well (due mainly to its incredible characterization and story). Then again, TLG was around 2001 I think.

You must be kidding me!!! You keep on playing, reading and reviewing a massive amount of books and games that I've just read and played, or read and played as a kid eons ago :D
Now that you have talked about this MI1 upgrade, which I bought last week myself, it was too much of a coincidence and I had to say this as a comment.
keep up the good work :)

The Monkey Island games were my favourite all time games growing up as well. Awesome stuff. Agreed with Ugo, keep up the good work.

As it happens, I've just played this myself, and I agree with you on the annoying interface (now that you remind me how the original differed). I found, unfortunately, that I couldn't activate the classic mode.

You're not quite right, by the way - you can die (if you wait too long underwater at one point), and there's a few places you can break it (as I know from gnashing experience) - but yes, that is in general a plus for the game. In fact, it's necessary, given how impossible some of the puzzles are.

However, I thought the best was at the beginning. The first section, on Melee Island, is brilliant; the second is frustrating and silly; the third is better, but can wear a bit. The biggest problem is probably the idiotic map - there's far too much hiking and rowing back and forth, back and forth, back and forth, which desperately needs to be speeded up with a simple click-and-teleport function (though the designers do take mercy on you eventually and give you a voice over instead of yet another slow row/hike back to where you've just been).

Those complaints aside, it's a hilarious game that has aged very well. I hope they do the sequel...