For the third year running, I attended the Gollancz Autumn Party in London last night. Whilst the party is arranged by Gollancz, they tend to have a fair number of other publishers and authors along as well, and it's a great opportunity to meet people and authors and get the latest gossip. 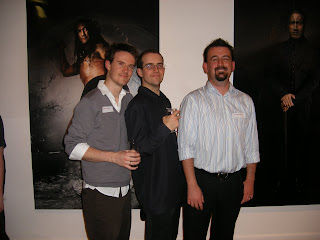 James from Speculative Horizons, me and Graeme from his Fantasy Book Review.
Of course, the nature of these things is that a lot of stuff is said 'off the record', so there are some limits on what I can report. I met Peter F. Hamilton for the first time, and he reported that The Evolutionary Void will hopefully be finished by Christmas and released next year, and is already looking at the projects to follow on from that. He is very happy that the new American editions of the Night's Dawn Trilogy are in three volumes rather than six, as apparently convincing booksellers to keep six books on the shelf simultaneously is much harder than a trilogy. He was a good guy to talk to as well.

I also grabbed a chat with Rob Grant, author of the extremely funny Colony, Incompitence and Fat and co-creator of Red Dwarf. He's working on a new novel and is apparently in talks to have Incompitence turned into a stage play (in Switzerland, if I recall correctly), which is quite ambitious as anyone's who read the book will agree.

I also spoke to Robert Holdstock, appropriate having just read Mythago Wood and ploughing through the dense-but-rewarding semi-sequel Lavondyss at the moment. I hadn't realised before a few days ago that Robert was also the author of The Dark Wheel, the novella that accompanied the original release of the all-time classic computer game Elite, released in 1984, so we had a good chat about that. His next book will be a follow-up to his recently-released Avilion. I also got a chance to meet legendary SF critic David Langford for the first time, who was a great guy and very funny. 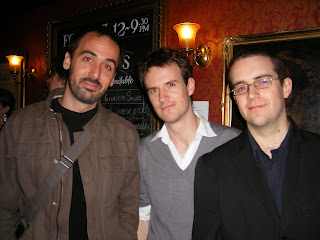 Chris Wooding, James and myself in a London holstery.
I also touched base with some other authors I'd met before: Joe Abercrombie, Alex Bell, Tom Lloyd, Adam Roberts (basking in the afterglow of not being nominated for the Booker Prize) and Chris Wooding, plus some of the reviewers and editorial teams from DeathRay and SFX magazines.

There was a bit of a blogger's mini-convention going on, with MinDonner from Sandstorm Reviews, James from Speculative Horizons, Graeme from Graeme's Fantasy Book Review, Gav from NextRead and Liz and Mark from My Favourite Books all in attendance.

All in all, a good time was had, much alcohol was drunk, and 2010 looks like being a great year for SF&F releases from Gollancz and the other British genre publishers.
Posted by Adam Whitehead at 17:43

It was great to see you guys again last night. Next year I will be there for the after party drinks as well! (Hopefully...)

I wonder how that got passed the spellcheck filter?

Good to see you, and definitely catch up with you again next year, if not sooner.

It was a mini convention and my first mega social literacy gathering. I'm now feeling that I performed rather badly failing to spot Peter F Hamilton (blast), Rob Grant (damn), Chris Wooding (drat), David Langford (freck), Adam Roberts (yikes), MinDonner(hell) and failed to say more than a hi to your fine self.

Must work on the moving round the room next time!!

Was nice to briefly meet you and it is a very exciting time for scifi.

Wow, great event and thanks for putting up the photos.

Dude wth is going on with your shirt, could you not find one that fit ?

Thanks for the post, sounds great. Any news on Scott Lynch?

Any did MinDonner say why she's not updating Sandstorm reviews any more?

Sandstorm is on hiatus, but will apparently return at some point.

No news on Scott Lynch. After waves of much optimism earlier in the year, things seem to have gone a bit silent again.

Dude! Thanks for the shout-out. Third year running, eh? Well consider yourself shunned.

So, when do we see you again?

Liz and Mark (but mostly Liz)

No idea :-) Severely depleted on funds, otherwise I'd probably be in London every other week for signings and things. I suspect I won't be down again until after Christmas.