The 'reality dysfunction' has escaped from Lalonde, overrunning several other Confederation worlds and asteroid settlements, subverting people to its will. On the Kulu Kingdom principality world of Ombey, Ralph Hiltch, a veteran of Lalonde, organises a desperate battle against the enemy. Pastoral Norfolk is easy pickings for the menace, but, with help from an unexpected ally, Louise Kavanagh manages to stay one step ahead of it. Ultra-advanced New California comes under siege, whilst the decadent Valisk habitat becomes a raging battleground between the subverted and the habitat's insane controlling personality. 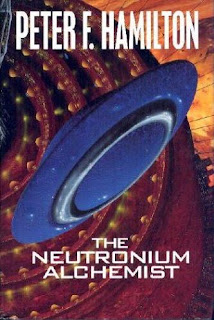 As the Confederation goes to a war footing and unleashes its resources against the new threat, another problem arises. Dr. Alkad Mzu has escaped from Tranquillity and is now on the run, seeking to complete a thirty-year vendetta to annihilate an entire star system. Joshua Calvert reluctantly agrees to pursue her, although half the intelligence agencies in the Confederation are also on the case. Meanwhile, Syrinx recovers from her own considerable physical wounds but finds her mental recovery to be much harder. At the urging of the Edenist government, she travels to the Kiint homeworld to find out how they defeated their own brush with the dysfunction thousands of years ago...

The second volume of The Night's Dawn Trilogy is the direct continuation of The Reality Dysfunction, pretty much picking up the story immediately. The book has a slightly different focus - Lalonde has been left behind and a couple of superfluous characters like Kelven Solanki have been rather abruptly jettisoned from the story - but it's generally a continuation of the same writing style as the first book. Simply put, if you liked the first book, you'll like this one too.

It improves on the first book in a few key areas as well. Hamilton reigns in the info-dumping, apparently partially a conscious choice and partially because after the first book set up the Confederation setting so well it's no longer necessary. In addition, the slow start to Book 1 is missing. Book 2 hits the ground running and, if anything, the pace increases and the tension ramps up throughout this immensely thick volume (it's actually several dozen pages longer than the first book). The sex scenes, which I know put some people off the first volume, have been radically reduced in quantity as well. After all, with the extinction of the human race looming and the Galaxy at war, getting laid is not the highest priority any more ;-) 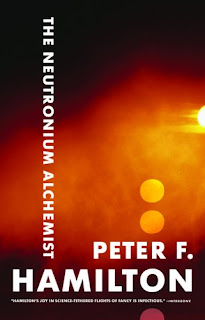 Unfortunately, the book does have a couple of niggling issues which detract from it. Hamilton develops this very peculiar obsession in the second volume of his broad-canvas space operas to have an extremely tedious car chase taking up a chunk of the book. It's not as bad as Judas Unchained (where such a chase takes up about half the book, intercut with other stories), but The Neutronium Alchemist does feature such a sequence which takes up several dozen pages. In addition, the Valisk storyline is simply not as compelling as many of the other plots in the trilogy, and the pages devoted to it do feel like they could have been better spent on events elsewhere. Once you've completed the trilogy and realise how little this plot thread adds to the overall story of all three books, it's inclusion feels even more pointless, despite some good lines from Rubra.

Readers' reactions also vary immensely to what happens on New California. I thoroughly enjoyed it and felt it was a logical extension of the premise, and if you can swallow the premise of the reality dysfunction itself than what happens next shouldn't pose any problems. But I do know people who thought it a step too far and stopped reading. A shame, because it actually works very well, and sets up the absolutely brilliant ending.

The Neutronium Alchemist (****½) is a very fine continuation of the story begun in The Reality Dysfunction. The story is meaty enough to support its immense length, and Hamilton's prose skills have improved somewhat from the first book. That said, the absence of some characters from the first volume and the amount of time spent on less-compelling plot-threads does leave it as a slightly less-accomplished novel. Still, as readable, epic space operas go, this is one of the very best out there, and it ends on an absolutely killer cliffhanger which at the time of publication was jaw-dropping (although now you can just go out and buy the third book straight away). The book is available now in the UK and, at long last, in one volume in the USA.
Posted by Adam Whitehead at 19:18