The Magicians by Lev Grossman

The brilliant but unambitious Quentin Coldwater is uncertain what to do with his life when he is offered a highly unusual opportunity: to study real, honest-to-gosh magic at Brakebills, a college devoted to the magical arts. He seizes the opportunity with both hands, and finds himself thrust into a strange new life that is by turns rewarding and terrifying... 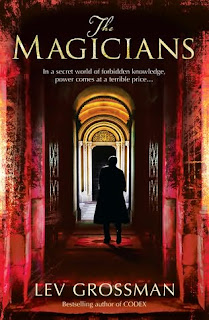 The Magicians has picked up a fair amount of applause from various bloggers, reviewers and authors this year, and has been cited as an 'antidote' to Harry Potter. The comparison is apt, since it features a young man going to a magical school, but at the same time also misleading. Quentin is 17 when the story begins, so the story is more adult-oriented and features more late-teenage angst than the Potter books (which may be saying something, considering the last couple of books in the series). In addition, although Grossman tips his hat with a direct reference to Potter at one point, he seems to much more be influenced by C.S. Lewis and the Narnia series. A large chunk of the storyline focuses on Quentin's boyhood love of a fictional series of novels called the 'Fillory and Further' books, which are clearly derived from the Narnia books.

It's an interesting novel which packs quite a lot into its length. In fact, Quentin's four-and-a-half years at Brakebills pass in a brisk 220 pages, although with plenty of pauses for character development and some good writing, and he still has time for a big storyline after that as well involving interdimensional travel and a traditional climatic battle.

Grossman's constant challenging of the comfort-reading status of crossover fantasies such as Narnia or Harry Potter is intriguing, although in some cases sends out a mixed message. Looking at some other reviews, a lot of readers came away from the book with the impression that Quentin's problems stem from reading a lot of fantasy fiction, which I'm pretty sure was not what Grossman was aiming for. There is also a problem in that Quentin is someone who has decent (if distant) parents, an okay upbringing, a fantastic schooling opportunity and a rich and interesting future, but spends the whole time moping about how crap his life is. True to life for a teenage character? Maybe. But it gets pretty old, especially later on in the book when Quentin is in his early twenties and should really be getting a grip by that point. Sympathising with such an arrogant character is difficult and as we are on Quentin's shoulder for the whole book (it's written in limited-perspective third-person, bizarrely except for one single sentence where we swap to another character for a few seconds), this is a constant issue. 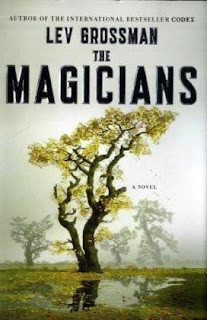 Grossman employs a straightforward prose style with some nice flourishes, but he has an issue with getting information across clearly. Sometimes characters vanish from scenes for paragraphs at a time until you think they're not there any more (or indeed, in one case a major character's presence at an event is not mentioned at all, despite them referencing it later) only for them to suddenly start talking. This is welded to a number of what appear to be 'orphaned' storylines. At least twice events take place that seem to be hooks into further plot developments (Quentin discovers a new form of magic shooting out of his fingers and later has a problem with a childhood friend who discovers the real nature of his school) but in both cases they are simply dropped and never referred to again, making their original inclusion apparently pointless. Very strange.

The Magicians also has a problem that by its very nature it is going to be compared to Harry Potter, which by virtue of its immense length is able to explore its storylines in much greater depth than Grossman can manage here, and to Patrick Rothfuss' The Name of the Wind, which is simply more coherent and better-written (although Kvothe and Quentin share some weaknesses as protagonists). This isn't to say The Magicians is not a worthwhile read, but it is one that is treading in some very familiar ground.

The Magicians (***½) is broadly well-written and interesting, with some good ideas. However, it feels like it needed a couple more editing passes and the unrelenting grimness of the second half is wearying after a while. The book is available now in the UK and USA.
Posted by Adam Whitehead at 00:58

Email ThisBlogThis!Share to TwitterShare to FacebookShare to Pinterest
Labels: lev grossman, the magicians

Gotta admit, when I reviewed this book I thought it had some serious merit, but you were spot on about the second half of the book. I guess I couldn't put my finger on it as I was reading, but when I got done I turned to my wife and said, "Wow, I'm seriously bummed right now." I guess that's decent writing, since it caused me to feel a strong emotion, but still.

Maybe you don't recall but his childhood friend does show up at the end of the book. That little side plot at least went somewhere as it looks like it could be fodder for a sequel.

Wow, FINALLY! I can't get over the almost-universal praise this book received, when its only "okay". I was so excited to give a try right when it came out, but it never engaged me like other books and series I've really enjoyed. The main character is unappealing, the "magic system" is incoherent even for someone who usually doesn't care about that type of thing; the plot meanders with no point for much of the second half; the "struggle" of what these magicians do with their powers in the real world is glossed over with little attention or self-awareness; and the writing itself is mediocre. I guess a lot of other authors and reviewers had to pile on the praise for a guy who wields a lot of power in his reviewer's capacity....there's no reason for the high praise this book received at all.

"Maybe you don't recall but his childhood friend does show up at the end of the book."

I thought that was the woman he'd just met a few pages earlier and convinced to start doing something more interesting with her life? There's no reason why his other 'Physical' class buddies would even know who his childhood friend was, let along drag her along for the trip.

I've had this on order since readin other reviews, it'll be interesting to compare yours to theirs once I've finished it.

Also interesting that we have yet another novel with lots of weather during a battle towards the end of the book, you're a fan of those aren't you Adam? ;-P

Adam, if you go back and re-read the end you'll realise that that woman is the same girl from his childhood. The one who failed the Brakebills test and remembered what happened, that magic is real, etc. She obviously had some talent and sought out others (finally hooking up with the two and then seeking him out.

It takes a small amout of imagination, but maybe you were too disappointed with the book at that point to put two and two together?