Two years ago vampires 'came out of the closet' and joined mainstream society, freed from their thirst for human blood by a synthetic substitute called Tru Blood. The USA and the rest of the world are gripped by debates and dissent between those opposed to vampires having equal rights and people championing a new civil rights movement. The residents of Bon Temps, Louisiana have to make their own minds up when a vampire named Bill Compton moves into town and immediately strikes up a curious friendship with local waitress Sookie Stackhouse. 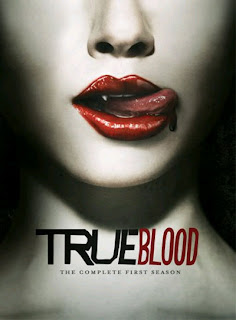 But shortly after his arrival, people who associate with vampires start being murdered. It appears a serial killer is on the loose and Sookie is on his list of targets...

True Blood is the latest hit show from HBO, and their biggest success since the heyday of The Sopranos. Based on the Sookie Stackhouse Mysteries by Charlaine Harris and developed for television by Alan Ball, creator of Six Feet Under, the show initially appears to be a trashy adult answer to the current craze for vampire books and films: the NC-17 version of Twilight, as it were. However, this is a simplistic analysis of the show, which is actually tackling a number of more interesting ideas and themes underneath its slightly sleazy veneer.

The show starts off a little slow, and it has to be said that the dancing around of the will they-won't they relationship between Sookie and Bill is a little tedious after the first couple of episodes. Luckily, the writers clearly aren't interested in keeping that going for the lifetime of the series, so they let the characters get together and see what happens next. This relationship is the core of the show and Anna Paquin and Stephen Moyer (who amusingly first played a vampire in the brilliant Ultraviolet mini-series a decade ago) sell it very well (and they got into a real-life relationship shortly after starting the show as well). Moyer as Bill in particular has some nice moments as he is very much a Southern courtly gentleman from the Civil War era making an effort to go 'mainstream', but he also doesn't have any problems with killing people who have wronged him or tasting human blood as long as he doesn't kill them. This somewhat hypocritical attitude is played well, but he isn't entirely called on it before the end of the season, so it's unclear if it's deliberate or not. Paquin has a much harder role to play, and there are moments where the actress seems to struggle with what's going on in her character's head, but at other times she does an excellent job.

Amongst the other cast members, Chris Bauer (Frank Sobotka from The Wire) and William Sanderson (the toymaker from Blade Runner) are superb as the town's ineffectual policemen. Ryan Kwanten has a really tough role as Sookie's quite spectacularly stupid brother, who dodges disaster by the skin of his teeth only to get into an even more spectacular mess later on. He just about manages to retain the viewer's sympathy even as the character's life becomes yet another car crash, which is a tribute to the actor. Rutina Wesley plays Sookie's best friend Tara and is rather tiresome to start off with, coming across a bit too much as a hard-assed, don't-need-no-man, all-attitude character but she rapidly becomes one of the show's strongest assets. The scenes where Tara has to confront her mother's alcoholism are superbly well-acted by both parties. Alexander Skarsgard steals every scene he is in as Louisiana's vampire 'sherrif', Eric, especially when paired with Kristin Bauer as his second-in-command, Pam. Lizzy Caplan also needs a nod as psychopathic hippy Amy, who has to combine two very different sides of her character to make a convincing whole and pulls it off. Nelsan Ellis is also excellent as Tara's highly dubious but charismatic cousin Lafayette (who impressively combines the roles of cook, road-digger, drug-dealer and webcam sex actor).

In addition to these characters, there's a vast number of secondary, recurring and guest actors and characters, from Heroes' Željko Ivanek as a vampire judge to TNG and BSG actress Michelle Forbes as a very curious new character who appears at the end of the season, and pretty much all of them are great in their roles.

The question of what True Blood is actually about is a difficult one to answer. On the surface, it's a simple murder mystery with vampires, a lot of sex and some quite spectacular gore (especially towards the end of the season). Of course, it's Alan Ball and it's HBO, so it can't be as simple as that. The show initially seems to be contrasting vampires and their struggle for acceptance with gay and black people, which is an interesting idea, if a bit superficial. However, our brief glimpses into the vampire society reveals that the vampires' bigotry and dislike of humans is far more ingrained in them than dislike of vampires is in human society, so the comparison seems to shift of one of a clash of completely incompatible cultures. If even Bill, the 'poster boy for mainstreaming', still does reprehensible and disturbing things, that suggests that the vampires may simply not be that interested in joining real human society. If that is true, that raises the question of what actually is their goal in coming out into the open? It'll be intriguing to see if this is a genuine plot point or simply a background premise that you have to go with and ignore the inconsistencies in order to enjoy the show.

Other issues are also dealt with in a rather puzzling manner, such as Tara's mother's alcoholism. The character blames her alcoholism on a 'demon' living in her soul and, since this is a show about vampires after all, the viewer is unsure whether to dismiss this as an excuse from a woman living in denial of her own failures or if there really is a supernatural element involved. It takes a surprisingly long time for the truth of this plot point to come out into the open, although it's quite clever when it does emerge. Similarly, the odd behaviour of certain characters is highlighted throughout the series, presumably to make us ponder if they could be the serial killer, so that when it is revealed they are not, the 'real' reasons for their odd behaviour don't seem to entirely explain their odd quirks.

On the other hand, the show doesn't seem to entirely take itself too seriously. It also seems to be well aware of the minefield of possible ways it has to offend the viewers, with quite a few black, gay and/or religious characters, and seems to get around the issues by lots of what TV Tropes calls lampshade-hanging (i.e. drawing attention to the issue and almost revelling in it rather than ignoring it). The show also takes what appears to be an overtly anti-Twilight agenda by refusing to have Sookie be rescued out of her predicaments by the various men-folk in her life (probably best-handled in the season finale) and turning her into a proactive character rather than a damsel in distress all the time, which is vital if we are to retain any respect and sympathy for the character.

True Blood's first season (****) is solid, enjoyable fun with some deeper ideas and themes running through it than it first appears. It's slightly trashy and sleazy (although never quite fulfilling the promise of its borderline-sordid title sequence) and on that level won't appeal to all viewers, but it's consistently well-written and superbly-acted, and is well worth a look. It is available now in the USA (DVD, Blu-Ray) and next month in the UK (DVD, Blu-Ray). Season 2 just finished airing in the USA and a third season will follow next summer.
Posted by Adam Whitehead at 22:06

Just finished season 2 and I'm still quite enjoying it. Michelle Forbes is great though she's not really given much chance to shine but when she is on she really chews up the dialogue and is as sexy as ever. Her story line is a little forced and overly extended in season 2 but it still works reasonably well.

Surprisingly I find Ryan Kwanten the standout in this show - I say Surprisingly because he came from Home & Away, one of the worst sops to ever air on Aussie TV.

Ryan Kwanten is like Goerge Bush's little brother. They should have casted him in W :)