The Alien won't be in the new ALIENS movies (sort of)

Ridley Scott has commented that the familiar xenomorph from the Aliens film franchise will not appear in his planned two prequel movies. According to Scott, he feels that the design has lost its ability to scare by becoming too familiar. The new films will instead address earlier periods in the familiar creature's evolution and will answer long-held questions about the 'space jockey' and the aliens' origins, including addressing long-held fan debates about whether the aliens are a natural organism or a genetically-engineered weapon. 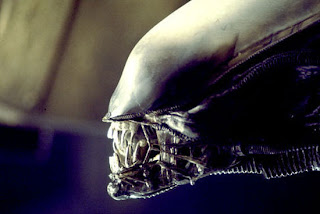 The first film will take place in 2085, thirty-seven years before the events of Alien, and will depict the discovery of a creature (possibly the proto-alien) on a planet called Zeta Reticuli. The second movie will take place five years before Alien and will likely address the events that led to the 'space jockey' spacecraft crash-landing on LV-426 with a hold full of eggs. Sigourney Weaver is not expected to take part, but Scott has stated that the main character in the first film will still be a woman. He also stated the new films will be 'tough', 'nasty' and will be in 3D to 'jump the bar' that Scott's friend and friendly rival James Cameron set with Avatar.

Scott's ambitions seem impressive, and there is no denying that the once-terrifying alien has become a little too familiar in recent years. Luckily, the aliens' tendency to alter characteristics depending on its host body gives a canon explanation for the reasons why the aliens will look different, alongside this notion that the aliens from the movies might be genetically-engineered from an earlier, different-looking lifeform. Still, the iconic and crowd-pleasing alien not being in the films is a bold move, especially since it is not clear if original designer HR Giger will return to work on the film.

Something very interesting in Scott's comments is that by saying the aliens were genetically-engineered in 2085, possibly by humans, he is immediately ruling the two Aliens vs. Predator movies (which take place in contemporary times) non-canon.
Posted by Adam Whitehead at 18:30

Time travel: the solution to all your canon problems!

unless the woman in the prequels is played by Cate Blanchett we are all fucked.

well, I for one have a goodly amount of faith in whatever Ridley Scott puts on film. He has an outstanding track record so I'm sure I'll like them

Solves the problem of consistently naming the film: "No Alien"

or better call it Alien Hoax