The Price of Spring by Daniel Abraham

A decade and more after the conclusion of the Autumn War, the lands of the Khaiem and Galt are still reeling from the aftermath of their devastating conflict. Otah Machi works to bind the two nations together in a new alliance, whilst the disgraced Maati attempts his own restitution by training a new breed of poets. However, the new Khaiem poets are haunted and traumatised by what happened to them and their families during the war, and placing the power of the andat in the hands of those burning for vengeance proves to be a decision with far-reaching consequences... 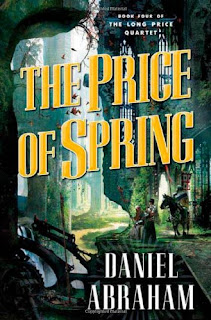 The Price of Spring is the fourth and final book in the Long Price Quartet, and brings the story of Otah and Maati to a conclusion. The four books span decades, almost the full lifespans of both characters, and in this final volume we see them reach an accommodation with themselves and their lives and the decisions they have made. The result is a somewhat melancholy book focused on repairing the damage from decisions made in earlier books in the series and reflecting on the paths that have brought them and their people to where they are now.

'Aftermath' books tend to be mixed affairs, and are not always the most popular works in a series. Martin's A Feast for Crows - an aftermath volume to the first three books in the series - has had a mixed reception, whilst Feist's Shards of a Broken Crown - the final volume in his Serpentwar Saga - is widely considered to mark the start of a terminal decline in his writing quality. Abraham sidesteps this problem by including a dramatic new storyline (springing out of story seeds planted in earlier books) about a rogue poet which works quite well and gives this final volume a central spine to hang on its themes of reconciliation, redemption and restitution, which are all well-explored.

There are some weak moments. Events in Galt are frequently referenced but not expanded on as much as might be desired, whilst the introduction of Galtic steam technology to the Khaiem cities is touched on but left under-developed. Whilst not a major story point, it would nevertheless been interesting to have followed these elements a little more closely. In addition the ending, whilst still bittersweet, does have a sense of being slightly too neat. I would also have expected far more anger and rage against the Galts for their role in events in An Autumn War. In particular, it is a massive stretch of believability that Balasar Gice, the individual responsible for basically laying waste to both Galt and the Khaiem in the previous novel, is still in a position of power in The Price of Spring and not either forcibly retired or even imprisoned or killed.

These problems are mostly minor and can be ignored in favour of the book being an elegant and reserved conclusion to one of the more accomplished fantasy series of recent years. The Price of Spring (****) is available now in the USA and as part of the Seasons of War omnibus in the UK.
Posted by Adam Whitehead at 19:09

Email ThisBlogThis!Share to TwitterShare to FacebookShare to Pinterest
Labels: daniel abraham, the long price quartet, the long price: seasons of war, the price of spring

I finished book one in the series, but had no desire to continue the series. I was surprised, since I read soft lofty praise for Abraham. I was thoroughly underwhelmed.

Good review, however. Thanks for posting it.

Elegant is the perfect way to describe this series. It certainly isn't for everyone being, really, a character study of two men across four volumes.

Some great reviews there Wert and it looks like we once again totally agree on a series.