According to Airlock Alpha, Joss Whedon, creator of Buffy the Vampire Slayer, Angel, Firefly, Dollhouse and Doctor Horrible's Sing-Along Blog, has been recruited by Marvel to direct the long-gestating film version of The Avengers, slated for release in 2012. 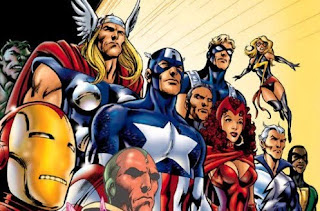 (note to British readers: this is the American superteam consisting of lots of superheroes, not the classic British TV series about a guy called Steed fighting crime, which was made into a terrible movie about a decade ago)

The film is the culmination of a long-term plan by Marvel, which is building up to this movie through several groundwork-laying films, such as Iron Man, Incredible Hulk, this year's Iron Man 2 and next year's Thor and Captain America. These movies are all linked by Nick Fury (Samuel L. Jackson) showing up at some point to recruit the hero for a new team he is putting together. The Avengers will see the team going into action for the first time, teaming up the respective movies' stars.

Whedon has been looking to get involved with a major superhero movie for some time, after he departed from the Wonder Woman project over creative differences. His last-directed film was 2005's Serenity.

And yes, that's a lot of Big Damn Heroes.
Posted by Adam Whitehead at 22:40

Email ThisBlogThis!Share to TwitterShare to FacebookShare to Pinterest
Labels: joss whedon, the avengers

That's interesting news. Not too sure how I feel about a Thor and Captain America movie, not exactly my favorite super heroes...but then again I was pleasantly surprised by the Iron Man film.

Seems like we've been waiting FOREVER for this all to come together. I hope Joss does direct it though. It would be worth the wait. I think Thor could be awesome if done right and with humor.

Not too sure about how I feel regarding Whedon's involvement here. I'm a Whedon fan, but he has very definite ideas about how these things should be done that don't often tie in with how the people providing the money want them done. Any word on who will play the Hulk?