Britain has been engulfed by war. The Scottish Parliament has declared independence only to find the British Army being deployed to keep control of the country. In retaliation Scotland has contracted a New Model Army, Pantegral, to fight on its behalf. 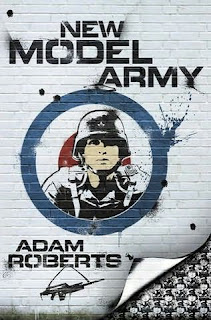 New Model Armies are paramilitary forces the likes of which the world has not seen before. They are democratic mercenary forces where every soldier is consulted - via real-time communications - over the formulation of tactics and strategy. NMAs are noted for their high morale, as unlike traditional armies their soldiers are never placed in danger through the following of orders handed down imperiously by politicians or generals safely removed from the front lines. Every NMA soldier is a general, medic, engineer and combat trooper rolled into one. They are totally self-supportive, capable of fighting en masse, engaging in guerrilla warfare or simply melting away into the countryside or urban areas and returning to civilian life at a moment's notice. They are an army that cannot be hit with bombs or WMDs, and who use advanced telecommunications technologies to stay ahead of the enemy, who are limited and slowed by their hierarchical command structures.

When Pantegral inflicts humiliating defeats upon the British Army at Basingstoke and Reading, the Brits and their American allies become obsessed with finding a way of defeating and destroying the NMAs once and for all.

Roberts' latest novel is ambitious, a treatise on the ideals of democracy and how warfare is practised. It is interesting (and a point raised in the press release) that in WWII it was the democracies that triumphed over the dictatorships (albeit the democracies aided by an extremely powerful dictatorship in the form of Stalinist Russia) when the feeling was that a democracy dependent on the will of the people, fickle and given to desiring a quiet life, could not stand up to the single will of a determined dictator. Instead the democracies triumphed decisively, adapting rapidly to changes in tactics and technology to meet the threat posed by the enemy and overcome it.

Roberts takes the same idea and applies it on a smaller scale, with an army which moves and operates as a true democracy, not having to wait for orders from high but capable of instantly reacting to changing circumstances. I suppose it's a sort of 'punk army' that does its own thing in its own way. From the outside it appears chaotic and anarchic, but the novel also depicts it as being extremely, even terrifyingly, effective. Would such an army actually work in real life? It's a debatable point (given the current fragility of computer networks, probably not, but with more resilient networks, maybe), but it also not necessarily there as a literal concept to be tackled, but as a gateway to bigger themes about democracy, republicanism, free will and personal responsibility.

Along the way there is plenty of action and impressive characterisation (the central narrator, who argues often that he is not the hero, is particularly well-drawn and his tendency to quote Omar from The Wire's catchphrase during moments of high stress is amusing), not to mention scores of blink-and-you-miss-them references to pop songs, philosophers and other writers, all of which makes for an entertaining and intriguing book.

New Model Army (****) is a thought-provoking, intelligent and occasionally funny SF novel that is well worth a look. That book is out next week in the UK and on import in the US.
Posted by Adam Whitehead at 17:16

The trouble with saying that the Allies triumphed because of democracy is that even the democratic nations' armies certainly weren't democratic. Look at poor Eddie Slovik in the American army. I'm not saying this to argue against democracy in the ranks, only to suggest that other factors explain the allied victory far better.

You get an advance copy of the book or something?

@ Anon, yes, this is a point that Roberts makes in the novel. Whilst the democracies' will prevailed (only with the assistance of the mass-dictatorship of Soviet Russia, though), their armies were actually extremely similar to the German and Japanese ones in hierarchy and structure.

@ JD: Yes, although this was a courtesy copy of the finished book rather than an advance review copy.

We're in agreement over this one, Wert. Loved it.

It's good that we've all moved on to admitting that the USSR played a part. But rather than saying that we won "with the assitance of" Russia, it would be better to say that Russia defeated Germany... while we were around. We're like the little kid who kicks a man in the shins when he's fighting, and then claims to have beaten him ourselves (or with a bit of help from the guy who was beating him up at the time).

I make the point not to snipe at you, but just because I think that in the West we still have a massive failure to recognise what happened, and the scale of what was involved.

OK, so I've left out a couple of battles against the Japanese that would have gone in there, but in terms of the war against Germany it was almost entirely fought on the Eastern Front. And even against Japan, for all that there's the American battle at Okinawa (after the Battle of Normandy), there was also the less-talked-about Russian-Japanese Battle of Manchuria - smaller than Okinawa, but the still size of the next two American-Japanese battles put together.

It's therefore the Eastern Front that has given WWII the status in our culture that it has. If you just take the west... well, if you add the whole of the German invasion of France to the whole of the Battle of Normandy, you get around about as many people killed as at the battle of the Somme alone. The Somme, Verdun, Passchendale and Gallipoli together killed more people than the total number of Allied soldiers who died in WWII.

So when we're talking about the advantages of Democracy - Democratic countries were essentially able to keep themselves alive (well, some of them), while two giant dictatorships tried to destroy each other, before rushing in to pick up some of the pieces. It was great achievement, in the circumstances, but we shouldn't become triumphalist through a loss of proper perspective.

Correct. However, the will of the democracies to fight in the face of totalitarianism remained extremely stong, even in Britain in 1939-41 long before Russia or America entered the war when the chances of victory seemed remote and defeat imminent.

Britain wasn't really a democracy during WW2. The government took for itself powers just as dictatorial as those in Germany, including the ability to conscript people, take property without recompense, impose indefinite detention without trial, and elections were postponed. Sure, we returned to democracy after the war, but during it we were a mostly-benevolent dictatorship.

The state retains a great many of those powers and, having added overt and covert surveillance via CCTV and internet/email monitoring, is arguably closer today to an authoritarian/totalitarian dictatorship. The current electoral system provides a sop to democratic principles, but primarily serves the entrenched interests of the rich.