A giant, dead squid on display at the Natural History Museum in London goes missing, to the consternation of its curator, Billy Harrow, and that of the police officers of the FSRC (Fundamentalist and Sect-Related Crimes unit). The police think Billy might be a link. So does the Church of God Kraken, which is unhappy with one of their deities being half-inched. Less happily, so do Goss and Subby, murderers and pain-merchants for hire. Half of London is out looking for the squid, for its disappearance is related to fevered dreams and portents of apocalypse. The squid must be found, or the world will burn. 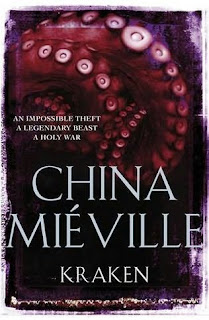 Kraken is China Mieville's seventh novel, and probably his most barking mad book to date. Kraken is a total one-eighty from the measured, focused crime noir that was his previous novel, The City and the City, and shares many more elements from his young adult-aimed Un Lun Dun, such as the fantasised (much more lightly here) depiction of London and a whimsical sense of humour (not to mention the short chapters). Where Un Lun Dun stumbled slightly in its opening chapters with Mieville trying to be down with the kids a little too hard, Kraken aims its culture and pop references more clearly at geekdom, with multiple references to TV shows like American Gothic, Lexx and Battlestar Galactica ("The revamp, obviously,"), a number of Moorcock references and a number of plot points related to Star Trek. There's also some nods at Gaiman, particularly Neverwhere (which also inspired elements of Un Lun Dun and King Rat), with Goss and Subby coming over as worthy homages to the latter's Croup and Vandemar, only less pleasant. 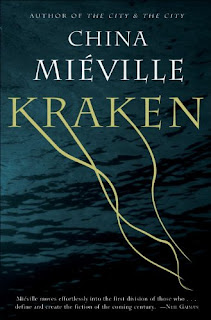 For a book that's so satisfyingly bananas in places, it makes you work hard in others. Mieville gropes for a prose style in the opening hundred pages or so, meaning that the opening part of the book is delivered in short, staccato bursts, one moment enjoyable, the next annoyingly obtuse to the point of turgidness. Mieville has never been an easy read, but he's also never been one with problems of flow in his books, and Kraken presents the first issues with this that I've come across in his work. Luckily, once the book shakes off its jitters and gets down to business, these problems fly out the window as well-defined characters, enjoyably weird factions and an ever more engrossing plot come to the fore. Along the way we meet some fantastic characters and creations, from Wati the stone-bound spirit to the loathsome Goss and Subby to the monstrous being known only as the Tattoo, and events culminate in an ending that is satisfying, if a little predictable (and the "It's the end, whoops, no it isn't, here's another one, and one after that too!" nature of the multiple endings is slightly wearying). Previous Mieville novels have perhaps been overall more cohesive, but ending an extended narrative seems to be something Mieville has struggled with in the past (his short fiction is notably better at this, most notably The Tain). Here he shows some true flair in his ending.

Kraken (****) takes a while to get going but once it does, it fires on all cylinders until it reaches a solid conclusion. Frustrating and hilarious by turns, it is a novel that rewards commitment. It will be published in the UK on 7 May and in the USA on 29 June.
Posted by Adam Whitehead at 17:49

I agree with you: the endings have always been Mieville's weak point in the majority of his books.

That's why I loved Iron Council when so many people seemed to dislike it; it had a good ending , while Perdido Street Station and The Scar just seemed to stop in a very anticlimatic way. Still great books, though.

I thought The Scar's ending was sensible, with plenty of excitement beforehand. You might say the incidents leading up to it could hardly be topped, so why banalizing it or making it a simple shocker.

I haven't read THE SCAR yet. Another that needs to be added to the reading pile.