Ridley Scott to bring Robert Harris' POMPEII to the screen 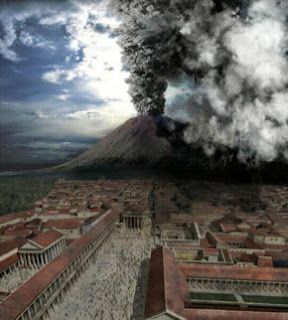 The novel takes place before, during and after Mount Vesuvius' eruption in AD 79 which levelled the city of Pompeii and killed thousands of people. The book follows several different characters, primarily Marcus Attilius Primus, an engineer who is called in to help repair the city's aqueduct when it fails, and whose investigations into the malfunction leads to the discovery of growing seismic activity in the area. Whilst Attilius is fictional, the historical figure of Pliny the Elder also plays a significant role in events.

The book was optioned for the screen in 2007 by Roman Polanski, but was delayed by the American Writer's Guild strike. With financing for Pompeii taking a long time to recover, Polanski and Harris instead worked on an adaptation of Harris' less expensive, contemporary novel, The Ghost, which opened in cinemas recently. Polanski's involvement in the Pompeii project has obviously been affected by his recent incarceration, so Ridley Scott's company Scott Free has taken over the rights and is now working on a new version of the script.

No word on potential shooting or air date, or if an American network is interested at this stage.
Posted by Adam Whitehead at 20:53

The Greco-Roman and Sword & Sandals trend is in full swing. Pompeii was a great novel, I wonder how they will adapt it.

Rome 2.0? Or just another catastrophy movie/series?

We will see, I am for sure looking forward to it.

Thanks for the heads up Wert! I'm a geologist and I'm just drooling over this. I read Pompeii and visited the ruins and really excited to see this on TV. Like Longasc said, I hope they focus on the characters and not on the volcano.

Coool. I may have to dust off Harris' novel and re-read it soon.