Ron Howard, director of films such as The Da Vinci Code, Apollo 13 and A Beautiful Mind, has signed on to tackle a movie trilogy based on Stephen King's seven-volume Dark Tower sequence. According to the source, there is also the possibility of a spin-off television series being developed simultaneously. 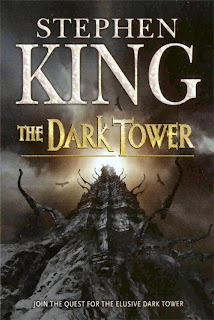 The series, which sees a gunslinger named Roland making his way to the forbidding Dark Tower, is the unifying cosmological link between much of King's other work, although its sales have not been at the same level as his other, more stand-alone books. King is currently writing a new Dark Tower novel that falls earlier in the books' timeline.

J.J. Abrams and the writing team behind Lost, Carlton Cuse and Damon Lindelof, had previously discussed adapting the series as a seven-season TV series, but had changed their minds given the desire to have a break after the conclusion of the six-year Lost project.
Posted by Adam Whitehead at 12:51

Oh, that was close. Someone please take the project before JJ Abrahms changes his mind! Preferably a British team.

Wow, crunching down the seven books into a trilogy may be tough. I hope Howard is up to the challenge.

Personally, I'd hoped that the Lost gang would direct it, since they're King fans and would do it justice. We'll see.

Have you read the series Wert? Just curious what you think of it.

Normally, I'm not one to look down upon a movie adaptation of a book series - but the Dark Tower, MASSIVE 7 Volumes (ok maybe the first couple are short) made into a TRILOGY?!?!

I agree. I have mixed feelings with Howard doing it at all, but a trilogy? That is simply absurd.

I expect a bare-bones, nearly incomprehensible mess like "The DaVinci Code" and "Angels and Demons" were. The core story will be there, but what made the series great will not be.

A TV series? Great. Give it to HBO. Films? Three films? I'd rather have no adaptation at all.

would like a write up from you on the books

I have THE GUNSLINGER but haven't read it yet. As it's quite short I was thinking of reading it soon (to knock off all the short books from my reading list quite quickly), but then if I really got into it I'd need to get the other books in one go, which I can't really afford at the moment.

I'll get to it eventually.

The good news is: even if the movie(s) are terrible, it won't affect the cult following that King's opus has generated.

I do hope that Opie hits a home run with this, though only time will tell.

This scares me A LOT. I don't know if anyone will EVER be able to capture the beauty of the tower in a movie-- especially a trilogy. But if someone is brave enough to try, he better know what he's getting into!!!!!

No way you can fit 7 books in a movie trilogy without leaving some meaningful stuff out!!

And no for a t.v series!! You can't take the Dark Tower and turn it into a kind of tv fast food. And who in their right mind could wait week after week for the next show... :þ!

Not sure about the Ron howard choice!!

The fact that the lost guys gave up on it should be a signal as to why this shouldn't be done. They love the series and some whitehats tell em they gotta do it in three movies and some bullshit tv series..which most likely wouldnt be hbo or the like (they cancelled deadwood in three seasons because it was too expensive to produce.) network tv adaptation would be a catastrophe and blasphamy..they deny it probably out of respect. Then you get some whore to do it in three movies who could give two shits about integrity.
brutal.

I don't understand why they are focusing on the epic, that is that is the Dark Tower series. Why not get marvel involved in a film based on the graphic novel/book four Wizard & Glass? It's short, and would be a great jumping off point for a t.v. mini-series, in the future.