Further to my previous post about the planned re-release of David Wingrove's Chung Kuo series, here is some more information from Corvus' latest catalogue, starting with the new cover art: 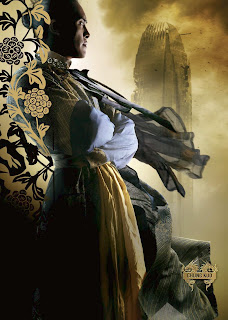 The cover blurb for Son of Heaven, the newly-written prequel novel to the series:

Britain 2085: two decades after the great economic collapse that destroyed Western civilization, life continues only in scattered communities. In rural Dorset Jake Reed lives with his 14-year-old son and memories of the Fall. Back in ’63, Jake was a dynamic young futures broker, immersed in the datascape of the world’s financial markets. He saw what was coming – and who was behind it. Forewarned, he was one of the few to escape. For 22 years he has lived in fear of the future, and finally it is coming – quite literally – across the plain towards him. Chinese airships are in the skies and a strange, glacial structure looms on the horizon. Jake finds himself forcibly incorporated into the ever-expanding ‘World of Levels’: a global city of some 34 billion souls, where social status is reflected by how far above the ground you live. Here, under the rule of the mighty Tsao Ch’un, a resurgent China is seeking to abolish the past and bring about world peace through rigidly enforced order. But civil war looms, and Jake will find himself at the heart of the struggle for the future.

The series, previously published as eight volumes in the 1990s, has now been 'recast' as nineteen volumes, named as follows:

Son of Heaven, The Middle Kingdom, Ice and Fire, The Art of War, An Inch of Ashes, The Broken Wheel, The White Mountain, Monsters of the Deep, The Stone Within, Upon a Wheel of Fire, Beneath the Tree of Heaven, Song of the Bronze Statue, White Moon Red Dragon, China on the Rhine, Days of Bitter Strength, The Father of Lies, Blood and Iron, King of Infinite Space and The Marriage of the Living Dark.

In addition to the all-new prequel, the 'new' books consist of re-written editions of the previous books, split into somewhat smaller volumes, as well as half a million new words of material making up several new books, slotted into the end of the series (the previous concluding novel to the series was heavily truncated due to publisher pressure; Wingrove has restored this section in line with his original intentions).

The nineteen books will be published over a period of forty-four months, running from 1 September 2010 to 1 May 2014.

The full cover design for the first book is as follows: 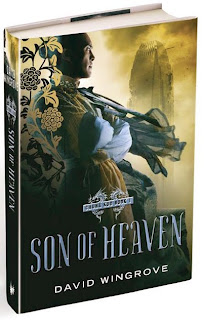 In summary, I have to say I'm impressed. Taking into account that the original books are still relatively obscure to modern genre readers, this publishing scheme is the equivalent of Robert Jordan completing all of The Wheel of Time before publishing a word, or Steven Erikson doing the same for his Malazan series, and then the entire thing being released over a very short period of time. It's a highly ambitious project and I wish David Wingrove and Corvus Atlantic all the best for it and will, of course, be applying for a review copy ASAP :-)

Update: Due to publishing difficulties, the release of the first volume has been put back to Spring 2011, and Son of Heaven itself has been revamped slightly and a second prequel novel introduced, Daylight on Iron Mountain, suggesting that this will now be a 20-book sequence.
Posted by Adam Whitehead at 22:59

I have the original 8 books and am looking forward to the prequel and the expanded last volume and whatever comes after. But not interested in buying the rewritten books in between.- Ian

Thanks for the info Adam, I've not been able to find much out about these. I picked up the first 3 books yesterday and if I like the first I'll stop and pick up the newer releases. I'm really interested to see what the series is like, I've heard a fair amount of praise for the books.

I actually have the entire series sitting on my shelf as we type. Though, I have always been very hesitant to read it as I heard the last book was finished in a rush, and alot of fans were very upset with it.

Though, I heard the series itself is good.

I thought I'd drop you a line to clarify what's been happening. I've been working with the wonderful Caroline Oakley (Ian Rankin's editor) to get the two prequel novels into final shape. A fine polish lies ahead, but they now exist as two stand alone volumes, meaning that the final sequence will be of 20 novels.

The second book, DAYLIGHT ON IRON MOUNTAIN, has had 60,000 words of brand new material added to it in the past few months.

I've now returned to working on the penultimate novel in the sequence, THE KING OF INFINITE SPACE, which will be an entirely new book. The aim is to have everything ready by the end of this year, together with an active website.

Oh, man, I dont know if I want to wait for this series. I have the orginals. I think I am going to have to start reading them soon. :)

I read the series and believe it to be a classic. I am astounded that it is not more well known. I did have some issues with the final volume, The Marriage of the Living Dark, so I am really looking forward to seeing the revised ending.

I will be buying these revised reprints and new volumes as soon as they appear. Hopefully, this time the series will get the accolades it deserves.

Hi David,
Is any chance you're planning to release Roads to Moscow some time? Looking forward to the new website and blog.

Great news on the new and revised books coming out - shame we have to wait until 2011 but I'm sure the author wants them to be perfect.

On the original books...they were a fantastic series - ambitious in scope, an original idea (how often can we say that), teriffic smooth prose and great characters. It was/is basically an unheralded sci-fi classic.

Like most fans I felt the ending was a let down, but it just goes to show how great the other books were in that we were disappointed in book 8 because it was only good and not great as the others were.

I hope the series relaunch goes well and his publishers get the marketing / publicity right. If people get to hear about the book and what it is all about they will buy it. If they read them they will love them I'm sure! David Wingrove is a genuine talent.

Keep us posted on any news and especially looking forward to the official website coming online in advance of the relaunch.

Will there be hardbacks of the 20 Chung Kuo volumes? Will they be available in the U.S.?

I LOVED the first version of the books and can not wait for the new/reworked volumes!!!!

Just checking to see if there is any new news about the release schedule. I recently reread the original series to whet my appetite for the revised volumes. I'm as much a collector as a reader, particularly of any ficiton with references to go/wei chi, so I am wondering what the plans are for special limited versions and whether there will be any way to purchase proof copies or the like. I have all the variations of the original series [as far as I know; 38 total editions for the 8 books] as well as some foreign translations, but I want to be sure to get all the new ones as they come out. I'm also curious what arrangements have been made so far for foreign translations.

The last news is the same. The scope of the project has entailed a modest delay from September 2010 to Spring 2011, with the finalised release dates still to be settled on (or released). More news when it comes in :-)

I was wondering if anybody know if a comic book based on the series will ever be available? does anyone have the rights to do it? I am an artist and haven't even finished the whole series, but I considered it my favorite story, I have done art based on it for personal satisfaction but have been for a long time wanting to do a comic based on it.
If anyone knows how to get in touch with David, I'd appreciate it so that I can find out about his interest in a comic version.

And in case your reading this David, you can contact me through my blogs

this are my art websites

Hi Frankell, my name is Gabriel, or just "Gabe" for short. First of all, I'm just another fan, so I'm no one with decision-making power. I just wanted to respond to your idea of a comic book or graphic novel based on Chung Kuo. I personally don't think that would be a very good idea, although I do think your illustration of the layered city is awesome. First of all, much of the appeal of Chung Kuo relies on the underlying thought processes of the characters, and also the narrative storytelling. The narrative voice in comic books takes up those boxes beneath or below the panels and I don't think they would have enough room to justify the rich narratives of Chung Kuo. You have to also remember that some of the greatest dialogue of Chung Kuo is the characters' thoughts, as opposed to what they actually say. Secondly, Chung Kuo is just full of scenes that could be considered extremely pornographic, not just sexually but also in blood-flowing gruesomeness. Like you, I wasn't offended by the scenes (they were necessary), but I can't imagine a single graphic novel publisher that would be willing to include those scenes due to the loss in market value because of the exclusively adult rating the comic books would have to bear. The only other option would be to censor out those scenes, in which case the story itself would suffer. Then again, I'm no business man, just another fan, and I've been wrong before, so it's really up to David W and his team. By the way, if these comic books are actually given the green light I'll definitely want to be one of the first to read one, so good luck!

The artwork is fantastic, and a graphic novel could be a brilliant edition to the series. Maybe not following the original storline but other charcters in the chung kuo 'universe' perhaps or something new?

I presume you are a professional (being that the artwork is so good) so lets hope someone sees the imagery and gets together with you to write it (Mr Wingrove sir...think of how big this could be).

There is definately a place for the sometimes graphic violence we read in the books in the graphic novel forum.

I'm eagerly awaiting this being released on the Kobo e-reader platform. Right now it's only available in print (and only in the UK?) , and on Kindle which doesn't help me.

He's added new stuff so you'll be missing info when you get to the end of the series. Most of the changes will happen towards the middle but they'll be there

Hi, what is the release dates for No 9 and subsequent? Seems ambitious to finalise the last twelve by early 2015??

The series is on hold at the moment. Sales were disappointing and David Wingrove is currently negotiating getting the rights back to self-publish.

I had wondered. Would be a shame if they don't come out. I'd buy the lot right now if they were available. Hope DW is able to resolve and publish, at least in digital form.