The Dragonmount.com team have Tweeted a picture from JordanCon of the tentative US cover art for Towers of Midnight, the thirteenth and penultimate novel in the Wheel of Time series, due for publication late this year. At a guess, the three characters on the cover are Mat Cauthon, Thom Merrilin and Noal Charin. 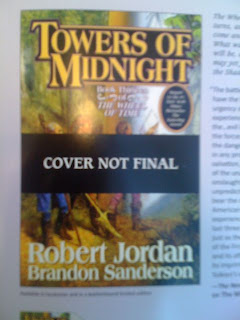 Okay, not actually that helpful, but it does appear to be superior to The Gathering Storm's depiction of Rand al'Thor having some kind of epileptic fit in front of the Addams Family house, even though it appears that Sweet is trading even more on past glories (this is no less than his twenty-first piece of cover art for the series by my count). This cover evokes his work on the Wheel of Time roleplaying game for Wizards of the Coast: 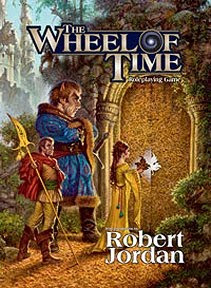 Based on this, I expect the full cover art to be released soon, hopefully followed by Orbit's UK artwork.

Update: More recent Tweets indicate that the cover art may actually be a different painting (although we heard this before for The Gathering Storm and they pretty much used what was in the rough sketches, just turning Rand around 180 degrees) altogether. 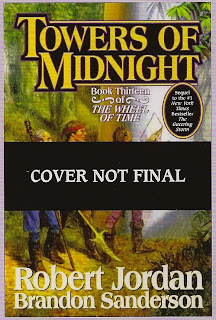 A bit off-topic, but I have a question: I read Wheel of Time soooooo long ago, but I remember that in The Great Hunt, there was a character who was referred to as a "sniffer" who had the ability to smell where "bad things had happened" or something. I think his name was Hurin or something like that. What I remember is that he was never mentioned again. Can any WoT fan help refresh my memory? What happened to the guy?

the cover art is not the best, that's for sure.

Hurin travelled back to Tar Valon with Verin, Egwene, Elayne, Nyanaeve and Mat, leaving them there whilst he travelled on to the Borderlands. We did not hear from him for some considerable time, but it was eventually revealed that Hurin's account of the Battle of Falme and the Dragon's Rebirth spread through the Borderlands and caused confusion and fighting, some believing the Dragon had been Reborn and some believing it to be rubbish.

Eventually, in Book 8 the Borderland rulers left their homelands with a vast army and set out in search of Rand. It's not too much of a spoiler to say that Hurin is with them, and puts in a brief appearance in Book 12.