As widely reported elsewhere in the blogosphere, Patrick Rothfuss has announced his deadline for turning in the final version of The Wise Man's Fear, the second book in his Kingkiller Chronicle trilogy, following on from 2007's acclaimed The Name of the Wind. 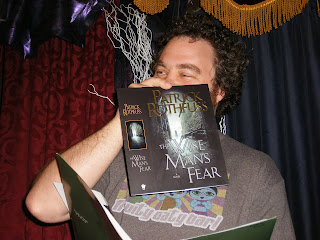 According to Rothfuss, if he finishes the final draft of book (there are three existing drafts) by September 2010, the novel will be published in the United States on 1 March 2011. Obviously, if he doesn't, it won't.

Encouraging news from Rothfuss. If Scott Lynch also hits his dates for the final draft and revisions to The Republic of Thieves, we could see these two much-delayed novels coming out very close together.
Posted by Adam Whitehead at 16:14

It really does seem like the 'big three' (Lynch, GRRM, Rothfuss) are trying to finish their books around the same time... Hmm.

Lynch and Rothfuss are part of the "big" three?

SORRY IT TOOK ME SO LONG TO FIND THIS SITE, BUT YES INDEED PATRICK ROTHFUSS SHOULD BE MENTIONED AMONG (ANY) LIST OF GREAT AUTHORS! HE IS MY FAVORITE AUTHOR PERIOD!!