Richard Morgan has been interviewed by NowGamer over his new role as writer for Crysis 2. In the interview Morgan, not normally known for his shy and retiring views, describes the Halo series as mediocre and Call of Duty: Modern Warfare 2 as examples of bad storytelling, which has already attracted some seriously negative commentary from the fanbases of those series (mostly responding to the highlights on Kotaku and io9 rather than reading the full story, and with rather too much over-use of the somewhat daft, "But if you read the novels Halo has a really good story!" line, which doesn't quite compute as it has no bearing on storytelling within the games). 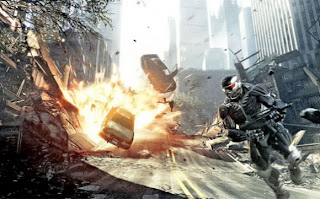 Morgan makes some interesting points about the use of story and drama in games, although I think it is also true that the interactive element (in the case of a FPS, combat) has to take precedence. A poor shooter with a great story is still a poor game, whilst a great shooter with a poor story is still an enjoyable game, if merely one that you are not going to remember or enjoy for very long. Better still is a story that adapts to a limited medium, something the Half-Life and Max Payne series have done so successfully. A good story in a much more narrative-driven genre like RPGs I would argue is also far more important (hence why I've taken over two years to get halfway through The Witcher, as the story is so mind-numbingly dull, whilst I tore through the full replay of Knights of the Old Republic 1 & 2 and Jade Empire in a matter of weeks last year).

Still, there does appear to be a decline in the art of good storytelling in games. We have Dragon Age and Mass Effect still doing good stuff, but when I think back to the turn of the decade when we had games like StarCraft, Freespace 2, Planescape: Torment, Anachronox, Hostile Waters and Baldur's Gate 2 giving us great stories regardless of genre and look at what we have now, it is hard to argue that this art seems to be in decline.
Posted by Adam Whitehead at 16:57

The Witcher! no joke - cool in some ways but I couldn't even finish it.

I don't think we're in decline, per se. It's all about where you look. You've mentioned the Bioware games, but there's also Fallout 3, which earned pretty high acclaim for interactive storytelling, the Uncharted series, Heavy Rain, Portal (and sequel, if previews are any indication), and Half-Life 2's episodic expansions (a little old, to be sure, but still relevant). There are tons of others I'm sure I'm skipping over (and i would have to argue in support of The Witcher, as well).

There are some rather unbalanced attempts, too, like Silicon Knight's Too Human, which was ambitious but wobbly in its storytelling. It has some decently compelling elements to it, though. And The Force Unleashed, which star wars fanboys deride for being non-canonical (even in the face of Lucas' support), but I found to be much more coherent and loyal to Star Wars than the prequels. And I have a soft spot for Halo: ODST; it was the same kind of Halo dish we've been served, but with the city Superintendent being a clever companion throughout the game.

I would argue just the opposite, in fact, that stories and storytelling are becoming much more varied and interesting in mediums that normally don't necessarily require a good story, such as first-person shooters and puzzle games.

Ah ... Knights of the Old Republic, brilliant games and totally addictive stories. Unhealthily so. I had to write my dissertation in 2 days thanks to marathon KOTOR 1 sessions.

I don't play many video games now though. I'm a story addict - and always disappointed by the stories (Fable 2 was the last. Poor game, poor story). I'd rather read a book. I don't think that's really the games' fault - franti has a point: there does seem to be a lot more focus on strong stories in games now. But obviously it's never going to be as fully realised as a book. There's always that annoying 'game' bit ... you know, running round shooting things and stuff ...

I always hate it when you play a wonderful game and the story line is great until the ending. It's like the writer's aren't sure what they want to do, so they come up with some generic (and usually short & compact) ending. I'm looking at Fallout 3 here.

yea, the ending of FO3 was pretty ridiculous, especially given that it ended your experience. No more free roaming or sidequests, just... end.

On a vaguely related note, it seems like more studios are trying to drag out as much story as possible from their gamers for no reason at all. case in point: God of War. The series could have easily ended with a kickass two-part mythology driven game, but instead they split essentially one story into two games. The first one can stand alone pretty well, but GoW2 ended with a pretty trite cliffhanger that merely extended what Kratos was doing in the first place.

FALLOUT 3 has some good storytelling elements, but overall it's a rather confused game on the storyline side (whilst enormously entertaining on the raw 'fun' side). Most notably because it's an open world in which you can 'do anything' but in practice you still end up coming back to the main storyline, which is relentlessly linear. In fact, this is just about the one and only area where FO3 is inferior to OBLIVION, where you can completely ignore the main quest and spend all your time doing the far more interesting Dark Brotherhood quests or the other guild missions and so on.

In FO3, because there are radically fewer side-missions and nothing at all comparable to the guild quests, you pretty much have to do the main quest. It's railroaded storytelling in an open world, which is a combination that doesn't work well.

In addition, games are suffering from the Hollywood syndrome of having to leave some kind of sliver of possibility at the end for a sequel, meaning that increasingly there is little sense of resolution and closure in games any more, even more annoying when the publishers decide to take a five-year break to do other stuff (apparently the case with the HALF-LIFE episodes) or take eleven years to bring out the next game in the series (STARCRAFT) after ending the previous instalments on cliffhanger endings.

That's why I'm increasingly convinced of what a rare treasure of a game PLANESCAPE TORMENT was. Brilliant use of storytelling in a game and complete closure at the end, with a sequel being a completely nonsensical idea (although further adventures in the same world with different characters would have been possible).

The Witcher mind-numbingly dull? Granted, it's often a display of dullness, but consciously so. It's realistic misery with dry-humour, meta-fantasy and a hint of dark romanticism.
I'd say it's a very intelligent display of game-storytelling - and was more convincing on the feature of consequences to choices.

Sorry, there's a half-sentence missing at the end: "than Dragon Age."

In all honesty, Dragon Age's main plot is pretty lame. I mean, you become a Grey Warden, get through Ostagar, and then gather some allies before confronting Loghain and wittling away at the hp of a giant dragon you've never met before and with which you have no emotional impact. At no point do you go through any event that forces you to look at the game from an entirely different view.

Compare that to BGII, or Torment, or KotORII, with treachery, confusion, and lots of other really fun stuff.

Dragon Age's strengths are really the combat, characters, dialogue, and implementation of the plot, along with all the various little stories you encounter as you're trying to gain your allies.

In Dragon Age's defense, though, all Bioware games follow the exact same pattern. I tend to prefer Mass Effect - I think the villains in particular were way more interesting (Saren, for instance, carried the first game) - in that the monomythic structure Bioware consistently follows seems much more fresh in a SF setting, rather than fantasy. But the strengths of Dragon Age are the characters and detail of the setting. It is just a straightforward dark fantasy piece, but none of the choices that you make before the end come out the way you expect. It's twisted, in every sense of the word.

I personally didn't like the combat, but that's just nit-pickery.

I think I agree with fallout 3, though. I didn't spend nearly as much time dicking around in that than I did in Oblivion, or even Morrowind. There just wasn't as much there. That being said, though, the main quest was fun, and the smaller storytelling elements ended up selling the experience for me.

I don't think I'd replay it again though. As opposed to the almost any of the other games listed.