HBO will air GAME OF THRONES alongside TREME next year

HBO has renewed the New Orleans-set drama series Treme for a second season merely hours after the first episode aired in the United States to large ratings. Treme, from the same team which made the epoch-defining sociological drama The Wire, is set in New Orleans three months after Hurricane Katrina devastated the city in 2005 and follows several inhabitants of the city as it attempts to rebuild. 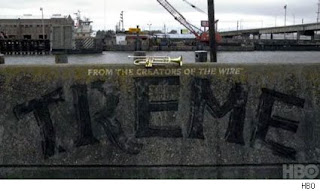 At the same time, HBO head of programming Michael Lombardo has said they plan to bring the show back next spring at the same time Game of Thrones will debut. Whether the two shows will be 'paired' in the traditional television manner (an established, hit show is used as a lead-in for a new drama or vice versa) or simply air in the same week remains to be seen, but it does reinforce the previously-given dates of between March and May 2011 for transmission of the first episode.

Lombardo gave praise to the additional scripts coming in for Thrones, and confirmed that reshoots would be needed for the pilot (presumably referring to the recasting of Catelyn Stark, with Jennifer Ehle being replaced by Michelle Fairley). Interestingly, he suggested such reshoots would be 'nothing major' despite widespread reports that HBO are looking for a new actress to fill the role of Daenerys Targaryen, suggesting that Tamzin Merchant (who played the role in the pilot) is moving on from the project. The potential recasting of Daenerys would certainly be 'major', necessitating the reshooting of the entire Morocco section of the pilot. However, it is possible that Lombardo's comments are merely meant to reflect HBO's faith and backing in the show and their commitment to the project regardless of some of the reshoots that may be required.
Posted by Adam Whitehead at 21:37

Email ThisBlogThis!Share to TwitterShare to FacebookShare to Pinterest
Labels: a game of thrones (TV series), a song of ice and fire, david simon, george r.r. martin, hbo, the wire, treme

Just thought I'd point out that Treme did not in fact debut to large ratings. Only 1.4 million- which by HBO standards isn't all that great.