In the city of Krasia a young boy grows to manhood and becomes a skilled warrior and charismatic warleader. His name is Jardir, and he feels destined to become the new Deliverer, a warrior who will lead humanity to victory over the murderous demons who rise from the Core every night. A man comes from the green lands to the north, Arlen, who impresses Jardir with his fighting skills. When Arlen finds a cache of weapons belonging to the first Deliverer, Jardir feels he has to betray Arlen, steal his weapons and leave him to die in the desert. 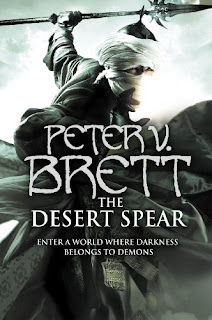 Several years later, the army of Krasia boils out of the desert and begins conquering the green cities. But Jardir heads rumours that the northerners have their own Deliverer, a mighty warrior known as the Painted Man who can fend off demons with wards etched into his skin. As Jardir continues his conquests, the Painted Man is forced to confront the sins of his own past as well as a new breed of demons, smarter and more cunning than any who have previously appeared.

The Desert Spear is the second volume of the five-volume Demon Cycle, following up 2008's The Painted Man (aka The Warded Man in the USA), one of the stronger fantasy debuts of recent years (although the amusing fact the novel was almost entirely written on a Blackberry on the author's morning commute seemed to attract more attention). This sequence is interesting because Brett has created a 'points of light' fantasy setting, where areas of civilisation are few and far between and the lands in between are infested with monsters and dangers. Few fantasy novels have codified the concept as well as Brett has done in these two books, where simply walking down a road at night is suicide. The result is an atmosphere of oppression and paranoia that worked well in the first novel and is being eroded in the second, as humanity gets better at fighting the demons and finding ways to survive.

Of course, the story of humanity simply gaining the upper hand and winning would be dull, so Brett ramps up the threat level convincingly in this second novel, with the Krasian invasion giving the northlanders a new enemy to worry about at the same time much more intelligent and canny demons, their princes and generals, start appearing. The escalating threat and stakes is well-handled by the author, who also laces some additional clues about the nature of the demons and life in the Core into the story.

Characterisation is well-handled, particularly of Jardir, Abban and the Painted Man, but Leesha remains a befuddling protagonist whose motivations and decisions seem hard to follow, whilst Rojer isn't given very much to do. Structurally, the novel also works well. Like Steven Erikson's House of Chains, the book opens by concentrating on a single minor character from a previous volume and exploring their backstory in-depth up to the point that it rejoins the main narrative, from where it presses forward. Jardir's story, which makes up roughly the first third of the novel, is gripping stuff, although the Krasians do occasionally veer too close to being Klingons (albeit with institutionalised male rape) for comfort, with much talk of honour and hideous abuse of the apostrophe being perpetuated. Still, it's a tightly-focused narrative that works well.

After this, the story returns to the northlands and continues the tale of The Painted Man. This section is more mixed, with the Painted Man being forced to return to several of his previous homes to confront the aftermath of situations he abandoned and walked away from in the first novel. This section is fairly well-written, but reminds the reader The Painted Man that moved very fast, with the sections in the Painted Man's homeland and later in Fort Miln being set up, developed and resolved with pace and energy. In contrast, these sections in The Desert Spear tend to plot a little, with the Painted Man falling prey to the enemy of good pacing, angst, as he agonises about his decisions and motivations at length.

Nevertheless, these sections remain readable, even though we are clearly in set-up mode for the third book (The Daylight War, which certainly sounds more dynamic) and little is resolved in this novel. One issue that does arise here is Brett's use of rape in the novel (of both men and women), which he employs as a blunt instrument of character development to push characters down a new path. Whilst war is ugly and Brett's world is certainly cold and harsh and it would unrealistic to suggest that rape would not happen in such an environment, it is also the case that he employs it a little too readily, and it doesn't entirely fit in with his prosaic and straightforward prose style. In contrast, Bakker uses it as an actual, horrifying weapon of war by the Consult whilst Martin and Jordan keep it (mostly) firmly off-screen and more effective for being so.

Another major issue is the lack of resolution. The book has something of a finale (two relatively small skirmishes with the new, more powerful demons) but it ends almost randomly, with the final page being rather less dynamic than the ending of may previous chapters. The book simply stops rather than climaxes, which is, as with all things, rather disappointing.

The Desert Spear (***½) is a readable and slightly different epic fantasy novel set in a well-realised world with some great ideas and solid use of action. Unfortunately, the excellent pacing of the first novel has been mostly lost and the author's over-use of rape as a narrative engine is dubious, whilst the book's lack of an ending is problematic. For this reason, it is a less satisfying novel than its forebear. The novel is available now in the UK and USA.
Posted by Adam Whitehead at 13:31

Sad to hear. After finishing The Warded Man I've been really looking forward to this. I'll still read it, but now with less enthusiasm.

I think the ending was great -- not quite a cliffhanger, but more of a 'wow, they can do that. I want to know more' moment.

I enjoyed this book. It did have a different feel to it, but then again this book served a different purpose in the overall story-arc than the first book.

and the cover is awesome

In truth a lot of fantasy series start off well in the first book with the hero/protagonist realising (the scope of) their destiny at pace. The second books tend to muddle a bit.

I'm no good expdessing myself but you just voiced my thoughts! I had great expectations for this book but they vanished as soon as the Golden Trio went their ways and the logic to their actions was nowhere to be seen! The final, was a total nightmare.... for god's sake really?! But really?! Couldn't you be more original and predictable?!