It was only a year ago that I never let the reading pile get beyond 20 books or so. At the moment it's 71 (all these here plus three more I couldn't find at the time). 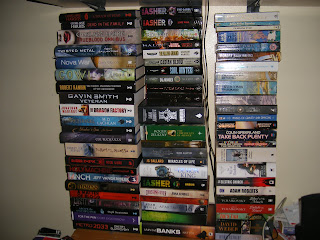 Three of these are planned re-reads - the Helliconia Trilogy in the far right pile - and I have a load more planned (such as the first six Malazan books and Jack Vance's Lyonesse Trilogy). Plus I can't read Blood of the Mantis or Salute the Dark until I get the first two books in the series. And there's a bunch of books coming soon that would supplant any of these (Mark Newton's City of Ruins and Chris Wooding's Black Lung Captain, most notably). I was also surprised that the PR copy for Finch suggested that reading Cities of Saints and Madmen and Shriek: An Afterword first would be a good idea, so I might have to get hold of those as well.

Anyway, barring further big new releases arriving, that's a good six months' reading taken care of there. Will I catch up? Probably not. Expect this pile to have ballooned to even more epic proportions by this time next year.

Finch is one of those odd novels that can hold up fairly well by itself, but when read after the other two (or at least Shriek), more is added to it.

A Canticle for Leibowitz is great. I'll be reading that Vance series later this spring/summer. Zelazny was a nice, breezy read and I keep meaning to buy that Ballard autobiography.

Wow! That is quite the pile. I am so jealous that you are reading the new Kay. I used to be a bookseller until they took my shop away and that is one that I am looking forward to most this year.

Can't wait to hear what you think of the Tchaikovsky series as well.

Wouldn't worry about the City of Saints and Madmen, but Shriek - the title character of the afterword - is heavily referenced in Finch, and a little context does the novel the world of good. Still. It stands alone just fine. I read the Ambergris novels all out of order and got on alright...

You'll also need to read the BL's Inquisition trilogy before Ravenor if you want more back story on many of the characters featured. Great detective 40K fiction from Dan Abnett, pretty different from the all-out war featured in the IG or SM novels. The first book of the Ravenor trilogy is also pretty much set in a city.

You haven't read the Chronicles of Amber? Wow.

Lyonesse is one of my favorite fantasy series ever! I'm REALLY looking forward to reading what you think of it!
Hope you'll start to read it soon!
The latest Kay just arrived on my kindle, I will read it slooooowly and enjoy it fully, because there are few books that leave you depressed after you are done reading them (because you want more) and Lay's book are among them.

Looks like you should be having a book giveaway or two, eh? Might help clear up the post-reading clutter!

*wonders if Adam would notice if she filched 2 or 3 books from those piles* :)

I am just shy of your pile by two books, good news/bad news I have several books arriving in the mail in the next few days.

Great selections of books that you have in that pile. Look forward to your insight on all of them.

Just out of curiosity (since I didn't see it in the pile) have you read House of Suns by Alastair Reynolds yet? I haven't seen you review it and I hate to add to your pile but it was a fantastic book and thankfully standalone. Knowing how much you like his other work I think you will agree with me on this.

HOUSE OF SUNS I do need to pick up at some point, as well as ZIMA BLUE.

Some good books there, be interesting to see what you think of Tchaikovsky's novels. Also, lol at Robert Rankin's book.

Adam, I recommend adding Jack Whyte's "Camulod" series of books to your pile. I just finished the last one.. really a fantastic and somewhat more realistic telling of the Arthurian legend.