An Autumn War by Daniel Abraham

Several times the rulers of Galt have attempted to destroy the poets, the sorcerer-mathematicians who defend the Cities of the Khaiem through the power of the spirits known as andat. Each time they have risked discovery and exposure and the destruction of their homelands in retribution. Now the Galtic general Balasar Gice has returned from a dangerous quest into the heart of the ruined Old Empire and brought back textbooks that may hold the key to destroying the andat once and for all, and enable the armies of Galt to purge the Khaiem before they can bind new spirits. 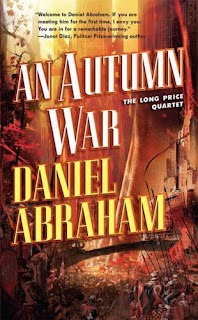 As the Autumn War begins, Otah and Maati discover that only they have the skills and abilities that can stop the invasion, but only if they have enough time, and only if they can fully control the powers they seek to summon...

An Autumn War is the third and penultimate volume of The Long Price Quartet, and also the fastest-paced and strongest book in the series. The first two books were slow-building tragedies revolving around intrigue, ambition and betrayal. The third book is about war, the reasons for it and its devastating consequences. Balasar believes that the world is threatened with annihilation at any time if the andat remain alive, whilst Maati is convinced that their powers can be harnessed for the good of mankind. Otah stands between them, having himself seen the evil and destruction that the andat can unleash and the imperfections in the poets' training, but at the same time rejecting the Galts' murderous answer to the quandary. 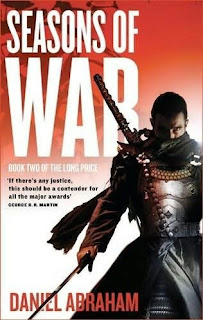 It's an interesting book, with the military action being interspersed with thoughts on the morality of holding weapons of mass destruction (although the multiple interpretations of this leads me to believe that Abraham wasn't making a one-on-one correlation to nuclear weapons) and the characters' different approaches to dealing with the crisis. Abraham isn't the best author in the world at describing battles and military action, preferring to hold it back in favour of emphasising the impact of the war on the characters and their relationships. This he handles with aplomb, building up to a conclusion horrifying and unexpected in its tragic ramifications.

An Autumn War (****½) is an excellent fantasy novel, the highlight of this four-book series, and is well-recommended. The book is available now in the USA and in the UK as part of the Seasons of War omnibus.
Posted by Adam Whitehead at 14:06

Is it necessary to start with book one then?

Yes. It is one story divided into four volumes, although each volume is to some extent self-contained. You could probably start with Book 1 or 2, but you really need to know the characters before reading Book 3.

What a strange question...

I was gobsmacked and horrified by what happened at the end of this book, it was truly horrific on so many levels.