Dave Lizewski, a teenage comic book fan, hits on the idea of dressing up as a superhero for real and ridding the streets of crime. Unsurprisingly, this turns out not to be a good idea and he proceeds to be hospitalised whilst trying to stop a car theft. With his nerve endings damaged in the incident, Dave discovers an enhanced ability to withstand pain, which assists his further crime-fighting attempts. As the activities of 'Kick-Ass' gain an online following, a father/daughter crime-fighting duo, Big Daddy and Hit Girl, decide to pool resources with Kick-Ass, but their much greater proficiency and use of lethal violence makes Dave feel out of his depth. When Big Daddy's nemesis, crime boss Frank D'Amico, mistakes Kick-Ass as being behind the disruption of his drug-dealing enterprise, Kick-Ass finds himself being targetted by a very dangerous criminal gang. 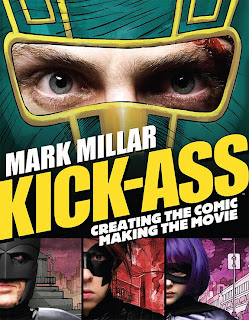 Kick-Ass is a movie co-written by Jane Goldman and Matthew Vaughn, working in close collaboration with Mark Millar and John Romita, Jr (the writer and artist of the comic book of the same name). Work on the comic and film proceeded in tandem, with deviations in the story being carried out to better suit each medium (for example, Big Daddy is a darker character in the comic book whilst the movie doesn't have the time to spend on this storyline so drops it). This is Vaughn's third stint as director, following on from Layer Cake and Stardust and earlier producer credentials on Guy Ritchie's earlier (and decent) movies, and was almost entirely funded by the director and private investors after the studios balked at the film's levels of violence and profanity.

The result is a deeply impressive film, probably one of the strongest-ever 'superhero' films, certainly one of the best of the last decade or so, although certainly not flawless. Despite the American setting, the film retains a strong British sensibility with the presence of several excellent British actors (particularly Mark Strong as the villain D'Amico) and a lot of British talent behind the cameras. The result is more of a withering satire of American superhero films and comics, with an underlying cold cynicism which is surprising (the beating Dave takes on his first crime-fighting exercise is astonishingly brutal) and also darkly comic. The most prominent well-known American actor in the film is Nicholas Cage in a solid supporting role, channelling the sort of 'controlled-but-demented maniac' he used to be brilliant at but we haven't seen for some considerable time (his performance also has, brilliantly, a touch of Adam West as the 1960s Batman to him), whilst the younger performers such as Aaron Johnson, Chloe Grace-Moretz, and Chris Mintz-Plasse all deliver solid performances.

Much has been made of Moretz, who was only 11 when the film was shot, and her impressive array of swear words and her perchance for violence (she easily has the highest kill-count in the film of any character). Moretz gives an accomplished and charismatic performance, and the psychologically dubious treatment of her character by her father (who trains her in gun and knife combat) is given some discussion in the film, although the comic delves into this area in greater depth. This is one area in which the film could probably have done with some more development, as Hit Girl does come across as a bit more of a psychopath than perhaps the writers intended (the 'child soldier' element appears to be more prominent in the comic, where her father's motives are much more questionable). However, questions of the morality of this storyline seem to miss the point that this element was intended to be challenging and raise questions over the juxtaposition of children and violence, with The Daily Mail instead focusing its rage on the 'sexualisation' of the character (an angle notable in the film for being completely non-existent, raising the question of what on earth goes through the mind of Daily Mail film reviewers when they watch films like this).

The film's pacing, script and structure is all impeccable, the story unfolds in a logical manner and the film's use of music is absolutely brilliant, with a fantastic use of several Prodigy tracks and the movie breaking out the superb soundtrack from the 2007 movie Sunshine at one point for one stunningly-choreographed battle sequence. This is a movie that looks and sounds fantastic.

The movie's biggest problem is that it betrays its essential premise towards the end of the film. It starts off as a 'realistic' examination of what would happen if an ordinary 16-year-old kid tried to become a superhero but by the end of the movie when bazookas, miniguns and jetpacks are blasting away in all directions this angle has gone out the window. The movie remains relentlessly entertaining to the end, but this shift in emphasis (perhaps unavoidable if you don't want the main characters all to get killed in the big finale, which is what would realistically happen) is slightly jarring.

Kick-Ass (****½) is a ferociously violent, darkly funny, bitingly satirical and at times genuinely clever movie which subverts the superhero genre. The film betrays its early convictions towards the end which is a shame, but it remains constantly watchable. It is on general release worldwide now.
Posted by Adam Whitehead at 17:06

Email ThisBlogThis!Share to TwitterShare to FacebookShare to Pinterest
Labels: kick-ass

Very cool. And here I was thinking it was just another super hero satire with lots of explosions. Guess i was wrong.

I am looking forward to this one, it comes to Korea this Thursday and then the next Thursday is Iron Man 2 so a great way to end the month of April.