Clarifying some DANCE WITH DRAGONS points

The news about A Dance with Dragons has resulted in a storm of questions and uncertainty, some of which have been clarified over the last day or so. Here's the info people seem to want to know.

Completion versus publication date
As Martin stated yesterday, A Dance with Dragons is not entirely completed yet, but it has been mostly delivered. Both Voyager and Bantam have had the Lannister's share of the manuscript for some considerable time, and editing work has been going on for much of the writing period. According to my info, the American publishers have even typeset and formatted most of the book, and are just waiting for the last couple of chapters to be handed over. They've also completed work on the maps (according to some sources twice, as they decided to redo the maps due to the quality of some of the fan maps produced in the last few years) and apparently the appendices, bar a couple of tweaks.

Martin has also confirmed that his current page-count is just a smidge over 1,500 in manuscript, and the draft pages he's working on and editing at the moment should carry it to 1,550, or just a bit longer than A Storm of Swords in length.

Split in two?
A Dance with Dragons will be published in one volume in hardcover and tradeback in the UK and USA. It should also be published in mass-market paperback in the USA in one volume, probably 18-24 months after US release. However, the mass-market paperback for the UK edition will be in two volumes, published a year or so after the hardcover. Those British fans thinking on holding for the paperbacks for reasons of cost should know that it will be more cost-effective to get the hardcover, since the hardcover will likely be hugely discounted on release.

E-books
Voyager are definitely planning a Day 1 e-book release alongside the hardcover. I also understand that Bantam are planning to do the same thing.

Cover art
The British cover art for A Dance with Dragons remains what was unveiled back in 2009, the silver cover with the sword hilt on it. Voyager have no plans to change this image, or the existing cover art for the series which they've stuck with since 2003. 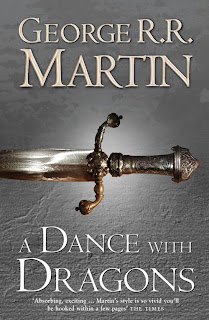 The American cover art for A Dance with Dragons has changed, however. The original green cover (in keeping with A Feast for Crows and the 2002 American reissues) has been ditched for good, as has the variant cover featuring a dragon in a green and black spiral. George posted two images for the American cover, and it is unclear if one or both will be used (similar to how The Name of the Wind had two variant covers), or if one is for the ebook and one for the hardcover etc etc. This still needs to be clarified. 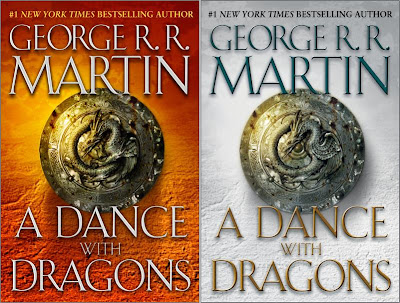 Maps
A Dance with Dragons will feature redrawn and new maps of Westeros, plus the first map we've ever seen of the Free Cities.

Relationship with A Feast for Crows
Last year Martin confirmed that some AFFC characters will appear in A Dance with Dragons as well. This is because some of the storylines in AFFC actually took place earlier than others in the book (particularly the Greyjoy/Iron Islands chapters), in fact during the events of A Storm of Swords, and ADWD can re-synch those storylines. ADWD also catches up with the events of AFFC between the 50 and 75% mark and more AFFC characters appear at the end of the book.

What about stuff being moved into The Winds of Winter?
Martin has confirmed that some chapters and POV characters have moved from A Dance with Dragons into the next book, making up about 100 manuscript pages.
Posted by Adam Whitehead at 18:00

Email ThisBlogThis!Share to TwitterShare to FacebookShare to Pinterest
Labels: a dance with dragons, a song of ice and fire, george r.r. martin

Do you know which Cover the american's will get? Orange or Silver... or will it be completely Random?

I am assuming the Canadian's will be getting the American cover? I believe Feast Canada got the yankee cover.

It is unbelievable that it looks like it is finally coming out. Unfortunately my first thought upon hearing it coming out was "I wonder how long the next one is going to take?". Either way I plan to do a full re-read before it comes out and once I get this hopefully read through it very, very slowly and savour every moment of it. For all I know it will be another six years until the next one comes out.

I find the UK cover very uninspiring and that's probably what we'll get over here in Australia. I may have to order this one from the US.

Thanks for this piece, Adam! Your analyses and summaries are always valuable.

whatever happened to the old covers which had lots of fantasy images and portraits of the lead characters? I liked those better than the new, minimalistic ones. Minimalism has its place, but a 7 or 8 or 9 part fantasy series, with each volume clocking at the 1000 pages or so, is not it.

I wonder if the audiobook will be released on the same day, and if they're lucky enough to get Roy Dotrice.

I doubt it though - Dotrice was going to play Pycelle in the HBO series but had to bow out due to poor health :(

Actually, things are looking up on that score. Roy Dotrice has apparently recovered more quickly than anyone expected from his health issues and may actually be available for the gig. Certainly Bantam know that fans are eager to have him back for the audio book, so watch this space.

I dont get why the US + UK have to have differant covers. Its 26E for hardback in Europe but orange cover wouldve been class