Several months have passed since Batman defeated the Joker's attempt to take over Arkham Asylum. Unfortunately, the asylum was almost overrun by Poison Ivy's out-of-control plants in the process, rendering it useless. To replace it, a section of Gotham City's run-down docklands has been sealed off and converted into a new prison and asylum, with most of the city's most dangerous criminals incarcerated there. Appalled, Bruce Wayne enters politics in an attempt to shut down the facility, only to find himself arrested and thrown into the prison. He has to survive, find a way of resuming his Batman persona and bring down both those running the prison and defeat its array of inmates at the same time. 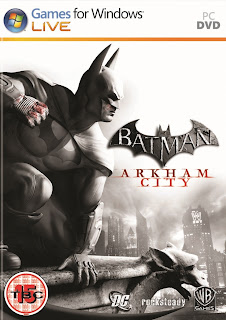 Arkham City is the direct sequel and follow-up to 2009's Arkham Asylum. Arkham Asylum was the game that, after dozens of failed attempts, finally 'got' the Dark Knight and made him into a credible computer game character. It did this by giving Batman a strong, dark storyline to follow, an array of gadgets to use (both in investigations and combat) and welding together the 'gritty' approach favoured by Christopher Nolan's movies with the more colourful and bizarre world of the Batman comics. It also had a great combat system and some solid stealth mechanics.

The follow-up is, inevitably, bigger and more epic. Arkham City sprawls across a much vaster area than the old asylum and is open to exploration from the very start (the asylum unlocked section-by-section as you went through the game and was more linear). The game is also divided neatly into both the main storyline and a series of side-missions, some of which are quite lengthy and involved in themselves. The main storyline involves Batman having to face (and, in some cases, work alongside) villains such as the Joker, Two-Face, the Penguin, Mr. Freeze and Ra's Al Ghul before taking on the director of the prison, the sinister Hugo Strange. However, a ton of other villains show up in the side-missions, including Deadshot, Zasz, Killer Croc (though only in a brief cameo), the Mad Hatter and Bane. Rather than feeling over-saturated, like almost any superhero movie with more than two villains, this gives the game the feeling of existing in an already-extant world, with a large amount of optional information available (via the Batcomputer) to fill players less-versed in the DC Universe on who these people are.

As with Arkham Asylum, the game involves tracking down clues to solve mysteries and beating a quite staggering number of thugs into unconsciousness. The game's setting also allows you to spend quite a lot of time perched precariously on building corners, gazing broodily into the night before spotting some passing thugs beating up a civilian and swooping down to deliver some vengeance. The setting allows you to 'be' Batman even more completely than Arkham Asylum, which is highly satisfying.

That said, the open world environment does offer some problems as well as some improvements over the first game. The first game benefited highly from its focused, linear structure that gradually opened up the asylum as you progressed (and allowing you to backtrack and reach previously-inaccessible areas with later-acquired gadgets). This second game sprawls flabbily in its opening sections, with the game taking a while to give you some sense of what you are trying to do. Once it does and you're alternating the main storyline with optional sub-missions the game kicks into a higher gear, but it's a slight disappointment that Arkham City isn't on fire from its opening moments the same way its predecessor managed.

The biggest surprise from the game is that the bigger setting doesn't necessarily translate into a notably different experience from the first game. There's about half again as much content (I completed Arkham Asylum in 11 hours and City in about 17) and a few more major locations, but the game's bigger canvas often translates in you taking three minutes of rooftop-swinging to move between locations rather than a minute of running as in in Arkham Asylum. The game - surprisingly - reuses the same locations several times over missions just as Asylum did in a clear cost-saving move, and after a while you realise that more than 90% of the buildings in the city cannot be entered or interacted with other than swinging from their rooftops. The much bigger location certainly gives rise to some new gameplay experiences, such as chasing down a serial killer on a time limit before he strikes his next victim, but it's not as transformative to the gaming experience as you might expect. In fact, after a while I was regretting the fact that we didn't have a full Gotham City game, with you being able to explore the city of Gotham as a whole and using vehicles to help complete missions as well as Batman's gadgets (which, a few minor additions aside, are pretty much the same as in the first game).

Still, if Arkham City is less of Grand Theft Gotham and more Arkham Asylum Redux, that's no bad thing. Combat is still physical and rugged, undertaken with impressive animations and combos. There's a greater variety of moves and opponents which makes the combat varied without becoming over-complex. The stealth mechanic is still enjoyable, with the game being at its best when you can take out a whole room of enemies with no-one realising where you are. The investigation side of things is still somewhat lightweight, but at least nods at Batman's detective origins. The story is decent and the voice-acting is as superb as its forebear, with Mark Hamill again taking top prizes for his gleefully deranged role as the Joker in what is his swansong appearance as the character. The scene where the Joker is taunting Batman only to get side-tracked into a puzzled analysis of the final episode of Lost is definitely the game's comic highlight. The game is, overall, a ridiculous amount of fun once you get over the slight hiccup of the start.