The Lands of Ice and Fire by George R.R. Martin & Jonathan Roberts

Okay, this is going to be a bit of a non-review because you probably already know if you are going to be getting this or not. Basically, it's a collection of full-colour maps of Westeros and Essos, the two continents which form the setting for the Song of Ice and Fire novels by George R.R. Martin. Either you're going to go, "Hey, awesome! I'm all in!" or be running away screaming for fear of being infected with Nerditis. 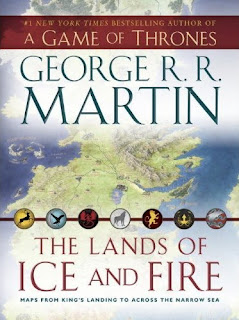 The map collection comes in a smart but somewhat non-durable folder. Don't put anything on top of it for long, as it really cannot support much in the way of weight. There's a single pull-out piece of paper with marketing speak on it (more or less the same as the blurb on the back ) and that's it for any kind of textual accompaniment. Those familiar with John Howe's excellent Tolkien maps, or the maps accompanying Terry Pratchett's Discworld books, will likely find this disappointing as those maps were accompanied by small booklets packed with geographical information (and in the Pratchett case, new canon material on geography). As it stands, we will have to wait another year for The World of Ice and Fire to clarify some of the new locations on these maps, and even then only some will be covered.


There are twelve maps drawn by Jonathan Roberts, each measuring 61cm x 92cm in size. There is a large map of the known world, which then has three larger, blown-up versions accompanying it, dubbed 'The West', 'Central Essos' and 'The East'. There are then larger-scaled-still maps of Westeros, Beyond the Wall, the Free Cities, Slaver's Bay and the Dothraki Sea. There are city maps of King's Landing and Braavos, and rounding off the set is a map called 'Journeys', which tracks the movements of the major POV characters across the five novels published to date. 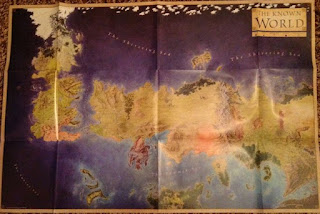 In general terms, the art design for the world and continent maps is decent, falling between the aesthetically-pleasing and the informative. A selling-point of the set is the brand-new maps of central and eastern Essos, including the far east. This is the first time that Ibben, Qarth, Asshai, the Shadow Lands, Yi Ti, the Jade Sea, the Summer Islands and other oft-mentioned lands and cities have been depicted on a canon map: the map accompanying the HBO website for the TV series is canon only for the TV series and is based on early drafts that George R.R. Martin later substantially revised. There are also new lands and locations not previously mentioned in the novels, such as a newly-revealed fourth continent (named Ulthos) and a new, huge island just off Qarth named Great Moraq which seems to be a centre of trade. This stuff is interesting, but also highlights a problem with the map set: Martin seems so keen to provide new information about Essos that Westeros feels slightly neglected. But since Daenerys has apparently already reached the eastern-most part of her journey (in Qarth), showing these eastern lands is nice but ultimately irrelevant for the books themselves.

Westeros itself is mapped much as in the novels, with little or new information of note. Indeed, it's even less well-fleshed-out than the maps and info in the books: the castles and towns on the Iron Islands apart from Pyke are not mentioned, and whilst the Quiet Isle is shown, the Whispers (also from Brienne's storyline) are not. Long-standing fan questions, such as where Stone Hedge and Raventree Hall (the seats of Houses Bracken and Blackwood) are located, remain unanswered, whilst the huge tributary of the Mander (which is almost as big as the Mander itself) remains resolutely unnamed. The map is nice - although not quite as nice as the infamous map by forum-member 'Tear' on the Cartographer's Guild website - but not particularly useful compared to the maps in the books or available for free online. Also, given the fact that we have a fairly reliable scale bar with the Wall (which is almost exactly 300 miles long), the refusal to put a scale bar on the maps is strange.

Of the city maps, King's Landing is curiously lacklustre. The mapmaker was going for a sort-of 3D depiction but seems to have given up at some point, with lots of the buildings being rendered as 2D squares sitting alongside more pictoral 3D depictions, which doesn't really make sense. It's the weakest map in the collection, though fortunately also the least essential: Green Ronin's far superior colour map of the city (for the roleplaying game) is easily findable online, as is the handsome black-and-white map from the Meisha Merlin limited edition of A Clash of Kings. The city map of Braavos, on the other hand, is pretty good and definitely worth keeping a hold of during future reads of Arya and Sam's adventures in the city. However, the decision to map Braavos and not, say, the more vital locations of Winterfell, Harrenhal, Dragonstone, Castle Black or Meereen is curious. 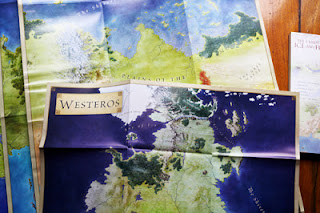 The journeys map is a nice idea, but ultimately impractical with just one image. Maybe one map for each book would have worked, but showing the journeys of some twenty characters across five novels simultaneously on one chart results in an image that is overloaded. It particularly breaks down in the Riverlands, which ends up almost buried under multiple layers of arrows and lines. Still, a nice idea and it does clarify the immense distances that Daenerys has travelled compared to other characters.

The quality of the paper used to print the maps on has come under some fire, with good reason. Unfolding and refolding the maps results in noticeable wear on the creases, with white lines and cracking noticeable after just a few viewings. This encourages keeping the maps on permanent wall display (that is, if you have enough space). However, the pre-folded nature of the maps means that they show visible creases which makes that not an altogether satisfactory solution either. Some fans have reported success in getting rid of the creases, though the results are apparently variable.

Is The Lands of Ice and Fire worth getting? Despite the problems, it's still a fairly handsome collection of maps. If fantasy cartography is your thing and you're a fan of ASoIaF, then it's a reasonable purchase. However, if you're more interesting in hard information about the setting you're better off waiting a year or so for The World of Ice and Fire instead. As it stands it's more of a curiosity and a gift idea for people who are fans of the books than anything essential.
Posted by Adam Whitehead at 18:33

Email ThisBlogThis!Share to TwitterShare to FacebookShare to Pinterest
Labels: a song of ice and fire, george r.r. martin, jonathan roberts, maps, the lands of ice and fire

Why don't you like Tear's map, his map is informative and still nice? I think if JRRT draw his maps today the would look more like Tear's map, not well-colored but a bit to nice for map to look real.

As I said, I do like Tear's map and I found the art style on that map to be more appealing than the one used in the box set.

You know you're suffering from "nerditis" when you read in this review that "the large tributary of the Mander remains resolutely unnamed" and you shout "damn it!" to yourself.

I'm not too worried about Raventree as at least the TV series map put it north of the Tumblestone (admittedly, not book-canon, but in absence of all else).