Colours in the Steel by K.J. Parker

Triple-walled Perimadeia is one of the richest city-states in the world, famed for its teeming markets and its impregnable defences. After decades of trying fruitlessly to take the city, one of the plains tribes comes up with an ingenious idea: send one of their own to get a job in the city arsenal and learn its secrets from the inside. 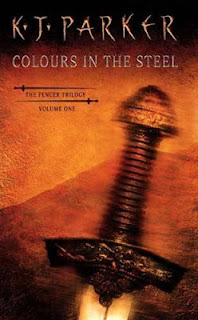 Even as an ambitious young chieftain's son plans the most audacious siege in history, life in the city goes on. Bardas Loredan, a former soldier, now works as a defence advocate. In the courts of Perimadeia cases are settled through swordplay and Bardas is very good at what he does...until a vengeful young woman hires the city's Patriarch to curse him.

Colours in the Steel was originally published in 1998 and was the debut novel by the enigmatic K.J. Parker. It's also the first in The Fencer Trilogy, although it also works quite well as a stand-alone book. It can be best described as a sort-of anti-epic fantasy. The trappings of much of the subgenre are present: swordfights, large armies, sieges, military manoeuvres, magic (more or less) and prophecies (kind of). However, most of this is window-dressing, with the focus being on Bardas Loredan and his troubled family life, and on young Temrai, the chieftain's son and spy who ends up plotting the genocide of a city he actually quite likes.

As with Parker's later books, Colours in the Steel has a cynical vein of black humour running through it. There are musings on the futility of revenge, the pointlessness of warfare and the quite insane meanderings of the military bureaucracy (there's more than a whiff of WWI incompetence to the leaders of Perimadeia and their military judgement during the siege). There's no glorification of warfare, with both sides suffering heavy losses and wondering if it's all worth it. However, there is also a distinct love of military hardware. In fact, Parker devotes pages to how swords are forged, how siege engines work and are built and on the best ways of defending a city under siege from a superior enemy. Colours in the Steel belies the tendency of much of epic fantasy to be pure escapism, instead educating the reader on matters mechanical and mathematical more effectively than most science fiction novels. Sometimes the deviations onto the best way to make a trebuchet work go on for a bit too long, but Parker's writing skill is enough to keep even the most detailed descriptions of gears and counterweights interesting. 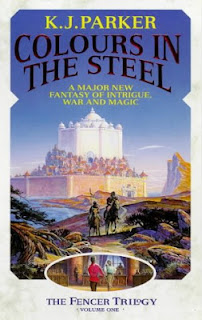 Long-term readers of Parker will know that she(?) has little truck with gratuitous worldbuilding. There is no map and the legal system of Perimadeia seems to have been created more for dramatic effect than any desire to create something that would work on a practical level. There is no 'magic system' either, with the city's Patriarch cheerfully acknowledging that he has no idea about how magic (the Principal, which actually seems more like some kind of limited prophetic or telepathic ability) works. What does work quite well is the subplot where the Patriarch and his best friend try to lift the curse the Patriach put on Bardas (without understanding what was going on), only to find other forces getting involved. Parker doesn't spell out what's going on with this 'magical' plot and it's left to the reader to piece together what it all means, which shows respect for the reader's intelligence.

The book's biggest success is in its characterisation, although it has to be said that Bardas himself is painted a little too straightforwardly. Those who are familiar with the whole trilogy (particularly his actions in the second novel, The Belly of the Bow) will be aware that there are good reasons for this, but newcomers may find Bardas a little too obvious as a protagonist. However, the rest of the cast are painted well, particularly Patriarch Alexius and his friend Gannadius who spend a lot of the book as outside observers and commentators on what's going on before having to get involved. Bardas's brother, Gorgas, is also a fascinating and contradicted character. Whilst definitely being a nasty piece of work, he also has his own sense of honour and fair play. He doesn't play much of a role in this novel, but is set up well for the sequel.

Colours in the Steel (****½) is a striking debut novel. It has the requisite amounts of well-depicted carnage and military activity for an epic fantasy, but it's focus is much more on the characters, their motivations and the realisations they lead to. The book is also darkly funny. It's an excellent example of an epic fantasy novel that uses the tropes and limitations of the genre to say something a bit more interesting than normal. The novel is available now in the UK and USA.
Posted by Adam Whitehead at 13:01

Email ThisBlogThis!Share to TwitterShare to FacebookShare to Pinterest
Labels: colours in the steel, k.j. parker, the fencer trilogy

Wasn't a huge fan of this trilogy... The Scavenger trilogy was amazing though... Best ending I've ever read.