STARCRAFT 2: HEART OF THE SWARM gets a release date

Heart of the Swarm, the first of two expansions for StarCraft II, has had its release date confirmed. The Zerg will attack in force on 12 March 2013. 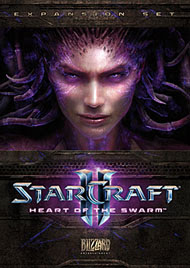 Staggeringly, this is almost three years after the release date of StarCraft II itself, which seems rather extreme for an expansion. The game will feature at least 20 new missions, with the storyline picking up some two years after the events of Wings of Liberty. The focus of the game will be on the character of Kerrigan and her attempts to regain control of the Zerg following her defeat at the end of StarCraft II itself.

Blizzard had previously claimed that Heart of the Swarm would be 'expansion pack-priced', which in the UK is about £19.99. However, the price currently listed for the title is £32.99, or about £3 more expensive than the typical cost of a full-price game in the UK. Blizzard have so far not explained the rather excessive discrepancy.
Posted by Adam Whitehead at 17:21

When its been that long since the initial release it would make more sense if we gott Starcraft 3 instead. 3 years to make an expansion pack, its just crazy. And the prize makes it seam pretty gready.

It is a long time, but it's my favorite game, so I'll be picking this up.

I'm more interested in what this will do to the SC2 esports scene than anything else. As for the prize, I'd say it's justified with all the work they put into it. Blizzard RTS expansions are usually just as good as the original game.

I'm holding out for the battlechest :D

I'm selling my unused SC2 Retail game because this is a total rip off. Cheapest I can get it is 43 euros and that's the same price of Crysis 3, Tomb Raider and the newest games.