Delirium of the Endless has resolved to find her missing brother, Destruction. She asks for the help of her family, but the only one to respond positively is Dream. Recently dumped by a mortal woman, Dream needs something to take his mind off moping and decides this quest is the answer. He and Delirium set out on what promises to be an adventure...until people start dying and Dream is asked the impossible by his son. 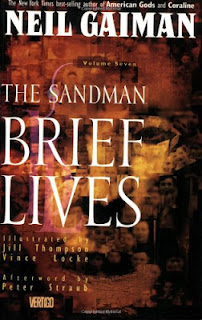 Brief Lives is the seventh volume in the Sandman series, picking up after the events of the Fables and Reflections collection. In particular, it expands on the story Orpheus in which Dream's son awoke the rage of the Furies and was left in a dire predicament. Dream, who has been changed more than he will care to admit by a century's imprisonment at the hands of a mortal, finds himself in a situation where he requires Orpheus's help but the price that is asked in return is dire. This in turn has grave consequences that will extend across the remainder of the series's run. This dark undercurrent gives Brief Lives a lot of weight for something that starts off as a light-hearted adventure (or at least as close as Sandman ever gets).

The collection has a number of memorable characters, such as Destruction's laconic talking dog Barnabas, but it's Delirium who receives the most attention and development. Delirium talks in non-sequiturs and apparently has the attention span of a five-year-old, but during the course of the story we learn more about her and how she sees the world. We also get interesting glimpses of her former life as Delight, before she changed (for reasons even the other Endless do not understand). The collection also delves deeply into the purpose and nature of the Endless, explaining who they are and what they do. Destruction's conclusions about the Endless are somewhat disheartening and led to his self-imposed exile, but Dream does not accept those arguments (although Delirium does...but still maintains her duties). Brief Lives is thus about lives and even how those measured in millennia still feel brief when the end comes. There's also the ongoing themes of redemption, responsibility and consequence that have formed the spine of the series since its beginnings.

As usual Gaiman's writing is accomplished and the graphic format forces him to conciseness (avoiding the problem of indulgence that has occasionally blighted his prose work, most notably in American Gods). Characterisation is deft, with Delirium getting the most attention but even briefly-appearing characters like Despair get moments of humanity that may force the reader to reappraise them. There's also some great comic moments, such as Dream's raven-who-was-once-a-man Matthew having to teach Delirium to drive (with chaotic results) and Dream, in full moping mode, conjuring a rainstorm just so he can go out and stand in it and look forlorn, to the amusement of his minions. The artwork is appropriately dreamlike, with artists Jill Thompson and Vince Locke nailing the surrealness of such locations as Delirium's realm. However, the artwork arguably works less well in depicting the real-world locations and Destruction, in particular, feels a little underwhelming after his larger-than-life first appearance (based on Brian Blessed in Blackadder) in the previous volume.

The only other issue of note is that the storyline featuring the tracking down of Ishtar feels a bit pointless. Gaiman raises the issues of femininity, empowerment and the suggestion that prostitution and religion (which were linked in ancient times in several cultures) were separated to prevent the rise of matriarchal power groups, all of which is fascinating, but also underdeveloped in the context of the story. Still, Ishtar's final dance is a powerful scene and one that has some resonance through the rest of the story.


Brief Lives (****) is a very solid instalment of The Sandman and is the one that proves the turning point of the entire saga (though this may not be immediately obvious). It is available now in the UK and USA. The stories in this collection are also included in The Absolute Sandman, Volume III (UK, USA).
Posted by Adam Whitehead at 11:52

I haven't read any Sandman comics....what is the 'order' of them? Or is it best / easiest to wiki that??

Wikipedia's entry on the comics has the correct order of the ten graphic novels. The first one is PRELUDES AND NOCTURNES and the second is THE DOLL'S HOUSE.