David Braben and Frontier Developments have put up a Kickstarter page for Elite: Dangerous, the long-awaited fourth game in the Elite series. 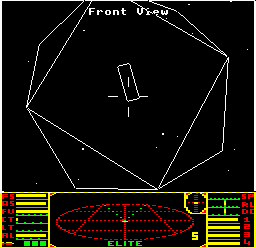 
The original Elite was released in 1984 on the BBC Micro and is one of the most famous, seminal and game-changing titles of all time. It was an open-universe game in which you took a spaceship and could trade and fight your way across eight galaxies and some 2,000 star systems, all in (wireframe) 3D. It was the first major 3D game and one of the first games to give you total freedom in how you approached playing it. The sequel, Frontier: Elite II was released in 1993 and featured filled-in 3D graphics, multiple controllable spacecraft, an even vaster universe (hundreds of millions of procedurally-generated star systems in a - somewhat - accurate recreation of the Milky Way) and the ability to land on planets. The third game, First Encounters: Frontier II was released in 1995 and was notable for the number of bugs present in the game, resulting in a lawsuit between the developers and the publisher.

Braben has been teasing fans with the possibility of an Elite IV for many years before announcing this Kickstarter project. Braben indicates that raising funds the traditional way has been difficult, and he's only been able to spare a few developers to work on the project in moments of spare time, hence the decision to go down the Kickstarter route.

So far, mixed feelings. On the one hand, Elite was a seminal, brilliant game, a total gamechanger and one of the biggest steps forward in the history of the form. Frontier was also a very solid game, even if its ambition exceeded its grasp. However, the Kickstarter page is scant on details about the proposed title: no graphics or videos have been posted, which is odd for a game that's been in development (even if at a low ebb) for several years already. So far the only hard info that's been released is that the game will have modern graphics (as you'd expect) and some form of multiplayer component (as you'd expect). Otherwise there seems little to distinguish it from the X series of space sims or Chris Roberts's recently-announced Star Citizen (or even EVE Online, though presumably Elite IV will have direct 'twitch' controls rather than the mouse-driven interface of that title).

Still, with 10% of the funding already raised within hours of the announcement and even the BBC running a news story on it, it looks likely that this will be funded. Certainly a project worth keeping an eye on.
Posted by Adam Whitehead at 14:34

I played the original Elite on c64 and then Frontiers on the PC a lot, and used to regularly visit the Frontiers.co.uk website when Braben was teading us with Elite 4 a decade ago. Honestly this looks like a hastily put together cash in on kickstart funding.

In that BBC interview Braben is asked directly how much development has been done so far and he says they have put a server network together for hosting the game. In other words, they have just leased an office and put some computers in it.