MERLIN to conclude after Season 5

The currently-airing fifth season of Merlin will be the last, according to the BBC and the producers. 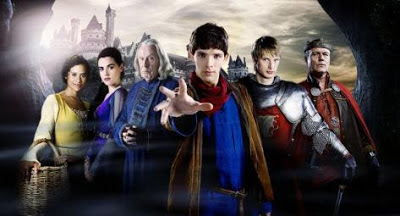 This news came as a bit of a surprise. When the show started in 2008 the producers claimed to have a 'five-year-plan' for the show which they would follow until its end. However, last year the producers also claimed to have ditched this plan in favour of the letting the show continue as long as it was popular, and were actively planning a sixth season and beyond.

The reasons for this about-face are unclear, but the BBC, actors and producers are all claiming that the show has come to a natural conclusion and it hasn't been cancelled. In fact, the show is still pulling in seven million viewers a week, which compares favourably to what Doctor Who does in the same timeslot.

The current favourite theory is that since the show was originally planned to last five years, the actors were only contracted for five years. When the producers decided to continue the show beyond that point, they entered contract re-negotiations with the actors. Since most of the actors (Tony Head and Richard Wilson aside) were complete unknowns when the show started, their resulting boom in profile has likely meant that they would be entitled to far more money for additional seasons, which may have made the series too expensive to produce.

Whatever, the situation, apparently the two-part season finale can effectively pull double-duty as a series closer as well. Here's hoping they knew about the end early enough to effectively close down the major storylines.

The production company are considering early ideas for a potential spin-off series, whilst the BBC are developing new dramatic projects to serve as a potential replacement next year.
Posted by Adam Whitehead at 13:14

It's always better IMHO to end a series on a high-point rather than beating it to death.
Unfortunately, there's more than one example of shows that'd been running out of steam well before they were finally canceled.

Of course, you never know what would have been. Obviously, I'm totally with when hoping for a decent wrap-up.

I must have had the "5-year plan" thing stuck in my head, because I've had it set in my mind this was the final season. So at least the news wasn't a huge blow to me!

I really, really enjoyed the series. I do miss the more episodic, light-hearted nature of the first few seasons, but the last couple arcs have been enjoyable as well. The characters have really grown up. Game of Thrones light I believe you called it :)

I'll miss it. But I have a big finale to look forward to! And I have confidence they'll end the series properly. Entire series I mean, not just the season (I think "series" can mean single season over there as well?) I'm in the U.S.

Anyways, Colin and Bradley make the show. Everyone else is great too, but I just hope that Merlin and Arthur can be on the same page finally...been waiting 5 years to see this! I hate the term bro-mance but these two somewhat define it! I really hope to see them both do great things in the future.