Terry Pratchett to pass DISCWORLD onto his daughter

In an interview with The New Statesman, Terry Pratchett has confirmed that his daughter Rhianna has received his blessing to work on additional Discworld projects after he passes away or is no longer capable (he is suffering from early-onset Alzheimer's). He has already made her a producer and writer on The Watch, a new TV series based on his City Watch Discworld novels, and has give her permission to write new Discworld books once he has hung up his pen. 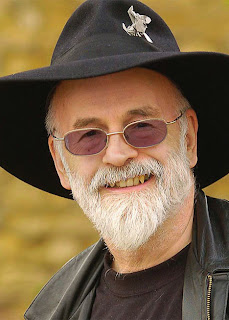 Rhianna Pratchett already has writing form. She has worked in the computer game industry for many years, originally as a writer for PC Zone magazine and The Guardian's computer games section before penning the storyline for the Overlord series and Mirror's Edge. Most recently she has worked on the new Tomb Raider game. This is appropriate as Terry Pratchett is a noted fan of the original games, once even considering writing a game called Tomb Stocker which would centre on the hapless minions who stock those tombs fall of traps and puzzles.

When this transfer would take place is not certain, with Pratchett noting that when he has to stop writing he'll be "incredibly angry." Pratchett also revealed that he suffered from a cardiac emergency whilst in New York on a signing tour last month, requiring CPR from his assistant to survive. He brushes off the incident, noting that, "I once heard it mentioned that signing tours can kill you quicker than drugs, booze and fast women. Some of which I haven’t tried."

The interview also hints at major news on The Watch to be revealed soon, as casting is now underway for the series.
Posted by Adam Whitehead at 17:48

I still can't get over the thought of a Terry Pratchett who can no longer write (somehow, that seems worse than death), but I'm relieved to hear he has plans to hand off the legacy.

Rhianna is Terry Pratchett's daughter!? What the WHAT?!

My grandmother had Alzheimer's, and I'm so sorry to hear Mr. Pratchett has it. Here's hoping he won't have to hang up his pen for a good while!

I heard this somewhere else too. I've read Terry Pratchett and really like him, so it’s sad to hear what’s happening to him. I’m interested to see where is daughter takes his work though. I’m a huge YA/adventure/fantasy fan and I’m just finishing up a pretty great book now called “Three Fugitives” by Nat Howler, it’s part of the Six Stones Trilogy. You can check out him and the book on the website http://nathowler.com/. Thanks for the post!