2077. Fifteen years ago, after multiple lengthy, bloody wars, the GDI and the Brotherhood of Nod have formed an alliance to bring the spread of Tiberium under control. The plan was successful and the 'Tiberium Control Network' has made Tiberium a cheap source of energy. However, a Nod splinter group led by the enigmatic Gideon has turned against Kane and is trying to spark a fresh war. This is not helped by the emergence of GDI splinter groups convinced that Kane will betray them. A new commander is recruited to lead GDI's fight against the Nod splinter cell, even as Kane's sixty-year plan reaches fruition... 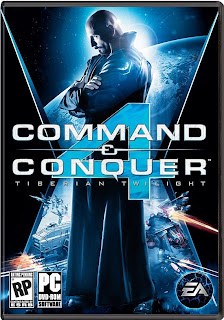 Tiberium Twilight is the fourth and concluding game in the Command and Conquer 'core' franchise, the Tiberium Saga. Released in 2010, fifteen years after the original Command and Conquer, it had to tie up a lot of outstanding plot points and conclude the storyline whilst also being a solid and enjoyable game in its own right. It would be fair to say it was not a great success on either front.

On the story side of things, Tiberium Twilight's designers decided that, rather than bring a sense of closure to things, they would come up with an enigmatic and strange ending which would leave the player free to interpret what happened. Suffice to say, given this is a fairly schlock action SF story with some very cheesy acting, not Twin Peaks, this was not the right decision. To have the story end in this way after a decade and a half felt half-arsed and, even worse, potentially sequel-baiting: despite some sense of resolution, a C&C5 is eminently possible. The storyline is also cliched and formulaic, even by this series's standards, with the acting being cheesier than normal, apparently due to people trying to take it all seriously (apart from Joseph D. Kucan, who as normal hits the right note of entertaining camp as Kane).

In gameplay terms, Tiberium Twilight is a bit of a disaster. The previous game in the franchise, 2007's Command and Conquer 3: Tiberium Wars, was unexpectedly great. It was a successful distillation of the game's traditional format and concepts combined with more modern RTS developments to create a compelling game experience. It wasn't the best RTS of all time or anything, but it was very solid. C&C4, on the other hand, appears to have been designed by people who have never played a C&C game before. Base-building is out. Instead, at the start of every mission you deploy a 'crawler', essentially a mobile construction yard. All of your units are built from the crawler, which can deploy and redeploy at will. This, in itself, is not a huge problem as it does introduce some fresh tactical options and considerations to the game. However, what is a problem is that there are three types of crawler, and you can only use one at a time. An offensive crawler builds tanks, walkers and heavy combat units. A defensive one builds missile and gun turrets, as well as infantry. A support crawler deploys aircraft and superweapons.

In practice what this means is that you can't build men and tanks at the same time, and if you want to build turrets to defend your crawler, you can't if you also want an offensive army. If you want to mix-and-match units, you have to literally blow up your existing crawler and deploy a second one (and you can only do this a few times per mission). This is a deeply stupid decision, as it prevents you from building a mixed army and forces you to jump through ludicrous hoops to do anything on the battlefield, a problem not experienced by any of the previous eight games in the overall franchise and their numerous expansions.

However, as stupid as it is, it ends up not mattering very much. It takes a couple of missions to hit on a very straightforward winning formula: build an offensive crawler, deploy some Hunter tanks and Titan walkers with a couple of Engineers to repair them (maybe a couple of anti-air units in the last couple of missions as well), destroy the offensive crawler and replace it with a defensive one, and have it wander behind the main army, dropping turrets to help in firefights whilst your main army fights on. As long as you have 2-3 Engineers and a modicum of common sense, your army is pretty much invulnerable (and all three crawlers can build Engineers to replace any lost in battle). The removal of Tiberium harvesting (you can now simply build up to your unit limit with no hindrance) also removes a large amount of tactical planning from the game.

There are moments when Tiberium Twilight (**½) does come to life: the assault on GDI HQ and the final battle at the Scrin Tower are both entertaining, and show how a 'baseless' C&C game might work a bit better. But for the most part the game is repetitive and formulaic, shackled to a cliched storyline and cursed with an unsatisfying ending (not to mention some ridiculous DRM). For one of strategy gaming's most venerable and famous franchises, this is not the ending it deserved. The game is available now on the PC in the UK and USA.

Yeah, skirmish battles went on and on for me. No fun at all. :(

My favourites of the franchise were always Generals, C&C3 and original Red Alert 1+2 (before it got weird).