Ice and Fire by David Wingrove

2201. Chung Kuo, the world-girdling city ruled by the Seven T'angs, is caught in a struggle between two ideologies. The T'angs favour stability and stasis. The House, the bureaucratic body that rules City Europe in the T'angs' name, advocates change and progress, exemplified in their construction of a generation starship. The Seven are now faced with the choice of allowing their Empire of Ice to be swept away by progress or by launching a pre-emptive strike to win back control of the situation...but risk triggering a civil war. 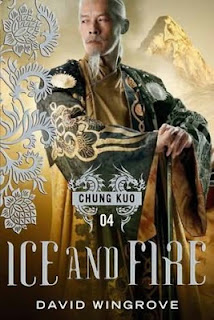 Ice and Fire is the fourth volume in the 'new' version of the Chung Kuo series, picking up shortly after the events of The Middle Kingdom. As well as being a continuation of that novel (understandably, as Ice and Fire was originally published in 1988 as part of the original Middle Kingdom), it also contains a number of self-contained character and story arcs standing against the epic events unfolding from previously.

If Ice and Fire does have a self-contained theme, it's the hope of the young to bring a brighter future than what their elders have achieved, only for that hope to be eroded by cynicism and, in some cases, cruelty. The novel focuses on characters such as Li Yuan, the heir of one of the T'angs, who hopes to be an intelligent and fair ruler but is distracted by his love for his murdered brother's widow. Ben Shepherd is a highly intelligent, gifted artist who is also ruthlessly intelligent and able to see what others cannot. Kim Ward is a young boy from the Clay, the darkest, lowest levels of the world city, who has shown an aptitude for science and engineering. However, Kim has also discovered the Aristotle File, a document which exposes the lie that Chung Kuo is built upon.

Wingrove manages the character development of these individuals with surprising effectiveness, given the slimness of the volume (under 300 pages) and the large number of storylines that are in motion. There are also complex political machinations between the Seven and the House, whilst Howard DeVore (the series' main antagonist) is manipulating both sides to his own ends. It's a busy novel, somewhat less relaxed than its immediate predecessor, and is a fast-paced read.

The book suffers from two distinct weaknesses. The first is a result of Corvus, a small (-ish) publisher, picking up the series. Rather than publishing the series as ten 600-800-page novels (still a lot shorter than the individual volumes of many epic fantasy series) over three years, they have chosen to publish it as twenty 300-400 page ones over six. This has its benefits (each book is a concise and fast read), but it also risks frustration as each book stops just as it is getting going. There are also cost issues (buying twenty hardcovers, paperbacks or ebooks is simply more expensive than buying ten, whichever way you cut it). Ice and Fire is the first book in the series where it feels like this is a bit more of an issue, and it may well become more of one as the series continues to progress.

The other is a notable rise in the amount of sex and violence in the book, including a torture sequence which recalls the more gratuitous excesses of Terry Goodkind (fortunately this torture sequence only lasts five pages, not the forty plus of a Goodkind novel). The sudden increase in such scenes feels a bit jarring after the first three books, which certainly were not for children but did not contain as many scenes. Probably not an issue for some readers, but definitely an element of concern (and, based, on how the original series unfolded, something that might become more notable in later volumes).

Ice and Fire (****) is a well-written, fast-paced and page-turning read. It suffers a little from its shortness, with the story cutting off just as it's getting going, but otherwise this is another solid instalment in what is turning out to be an impressive SF epic. The novel will be published on 1 December in the UK, and American readers will be able to get copies from the Book Depository.
Posted by Adam Whitehead at 10:22

Mmm. I read the original series of these books back when they came out, and every time I see one of your reviews I'm sooo tempted to pick up these new editions.