Early days, so not much info so far apart from the already-confirmed airing date: 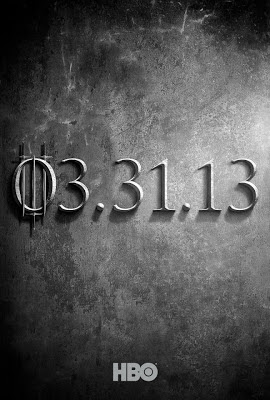 The image has a few nice features to it. The three swords are clearly a reference to it being the third season and the reason for the swords as a motif is because the season is based on A Storm of Swords (or rather, the first two-thirds of it or so). The backdrop might also be a reference to the Wall, which will figure prominently as a destination this season (at least, if it goes by the book).

As for when we'll see the first footage, I'd put my money on a teaser of some kind after the finale of the third season of Boardwalk Empire, which airs in the USA on 2 December.
Posted by Adam Whitehead at 23:07

That's a lot of threes

Well, at least we know when it is!