A size comparison of fantasy worlds

Something that may be of marginal interest. A size comparison of various fantasy worlds that I created: 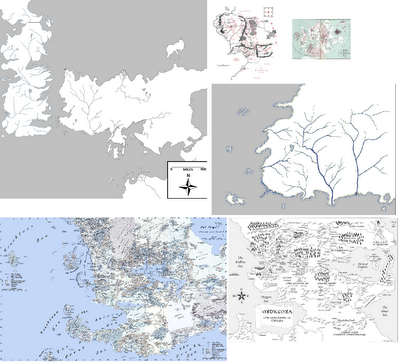 At top-left is Westeros/Essos (the HBO version of the latter) from George R.R. Martin's A Song of Ice and Fire. Next to it on the top line is J.R.R. Tolkien's Middle-earth, with Ansalon from the Dragonlance world next to that. Below them is Robert Jordan's Wheel of Time map (which was tricky to get right, as the distances given in the books are sometimes contradictary). At bottom-right is Raymond E. Feist's Triagia (on the world of Midkemia), the setting for most of his Riftwar fiction. At bottom-left is Faerun, the principal continent of the Forgotten Realms world.

Something that is surprising here is how small Middle-earth is compared to these other, later-created fantasy worlds.
Posted by Adam Whitehead at 12:17

Email ThisBlogThis!Share to TwitterShare to FacebookShare to Pinterest
Labels: a song of ice and fire, dragonlance, forgotten realms, maps, riftwar saga, the wheel of time

Cool. A lot of authors have no sense of scale :)

Maybe add a map of Europe as a comparison?

Perhaps because Middle-Earth (or the part of it we see) actually has realistic distances that could be travelled in the time-scales mentioned. If people actually walked at real walking pace in Randland, we'd still be halfway through the first book...

...dear lord, the Kingdom of the Isles is ridiculously big. Social and political structures of a small medieval fiefdom, actually covers the whole of Asia... and that's not Triagia in that map, that's just the middle bit of it. There's a huge expanse south (Kesh) and north. There's a map showing the entire continent here: http://www.elvandar.com/world.htm

Any idea on how the Malazan world would compare?

It's worth remembered that Lord of the Rings also covers a small amount of time compared to other fantasies (six months compared to ASoIaF's 3 years so far, WoT's 2.5 years so far) etc. There's been significant analysis of the time that's passed in the WoT books and the distances people walked/rode and it does all track (although it's still all only possible due to the advent of teleportation magic halfway through the series).

The justification for Midkemia is that the population levels of the continent are absolutely tiny. The Empire of Kesh has 5 million people according to one of the books, outnumbering the Kingdom by about 3-1, which is laughably tiny compared to medieval Europe. Why the population is so tiny is never really addressed.

As for Malazan, Steven Erikson has never explained what the 'leagues' are on the maps that he uses. Leagues don't have a set value, with Tolkien and Martin using 3 miles = 1 league and Jordan 4 miles = 1 league, whilst real life sometimes had more than 10 miles to one league. Until Erikson clarifies that, it's not possible to compare the sizes of his continents with these other ones.

A league is supposedly the distance a man can walk in an hour - so perhaps Jordan assumes that the people in his world are either generally larger or more used to travelling than those in Tolkien and Martin's worlds...

Very interesting post. No surprise about small distances and time period of LOTR - the book is itself very small if compared to contemporary fantasy series.

And shame, that Jo Abercrombie has no global map.

I'd always assumed a league was 3 miles. All the old people I know (ie educated pre decimalisation) seem to agree on that. Encyclopaedia Britannica seems to say 3 miles was the standard in English speaking countries but that the distance of a mile varied a fair amount.

Fact in, most people in medieval and post mediaeval society seldom went more than a days journey from where they lived, so the concept of a 200 league journey would be about as nonsensical as a trip to the moon.

This is not Middle-Earth. It's just a part of it.