Wade Wilson is a smart-talking mercenary who takes a lot of small-time jobs warning off stalkers and helping people (for money). He meets Vanessa, the love of his life, but then discovers he has cancer. Fearing losing her, he accepts an offer from a shadowy surgeon named Ajax to grant him superpowers of healing to get rid of the cancer, in return for working for Ajax. When it turns out that Ajax is a lunatic and only gives Wilson his powers after disfiguring him for life, Wilson is "unimpressed" and seeks revenge, becoming the crime-fighting lunatic (and constant thorn in the side of the X-Men) Deadpool. 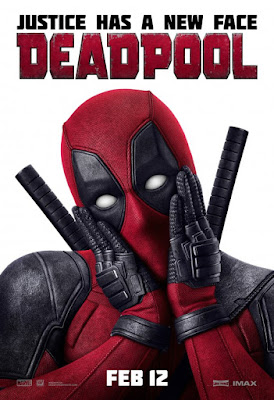 Conventional wisdom is that superhero movies are for, if not kids, then all the family. People in funny costumes running around and blowing things up? Definitely something mainly for children that adults can also enjoy. That assumption has driven the marketing and budgets of almost every superhero movie since the original Superman in 1978, but it has certainly been the dominant market stance since Iron Man in 2008. The occasional attempt to make a superhero movie for adults like Watchmen and Kick-Ass, complete with swearing and more graphic violence, has met with relative financial failure. If you have an adult-oriented comic and want to see it faithfully on screen, your only bet has been to get it on TV instead (the route chosen by Preacher and The Walking Dead).

Ryan Reynolds doesn't do conventional wisdom. A long-time fan of the Marvel Comics character Deadpool, he finally got to play the role in X-Men Origins: Wolverine. After an extended cameo, the character had his mouth sewn up and turned into a lobotomised bad guy. Reynolds wasn't impressed and neither were the fans. So began a seven-year campaign to get the character on screen, taking in multiple script runs, test footage, leaked test footage, last-minute budget cuts and a genius marketing campaign. Finally Reynolds and comic fans everywhere have had their patience and faith rewarded: Deadpool got rave reviews and took just under $300 million in its first five days on release. The R-rated action movie may have just had the shot in the arm it needs.

Deadpool is a gloriously demented, funny action move about a dude who gets disfigured for life by a British villain and then spends ages trying to get revenge, only for it to be upset by the X-Men (well, two of them). He then spends a bit more time trying to get revenge, the bad guy kidnaps his girlfriend because reasons and there's a big showdown on a beached aircraft carrier. The stakes are surprisingly low, the action fast and brutal and the one-liners never stop coming. Deadpool is a very, very good action film and superhero movie as well as a satire on the genre. This is what helps make it successful.

The other thing is timing. Watchmen isn't a terrible movie, but its heavy, metafictional commentary on superhero movie tropes didn't resonate very well in 2009 when the superhero movie genre was still in a relatively early stage (there'd been loads of them, but it wasn't until the Marvel Cinematic Universe took off that it became all-encompassing). In 2016, with a new superhero movie coming out every five minutes, Deadpool's fourth-wall shattering commentary on the genre works a lot better. Plus Deadpool is genuinely funny, the result of a tremendous script and some excellent ad-libbing from the cast.

The cast are phenomenal. This is the role that Ryan Reynolds was born to play and his delivery of hilarious, foul lines is perfect. More importantly, he can also sell scenes of anger and emotional distress. His Wade Wilson is a flawed human being, not just a delivery mechanism for dick jokes. TJ Miller is equally hilarious as his friend/barkeeper/confidante Weasel, whose ad-libbed responses to Wilson's new appearance may form the best part of the film. Ed Skrein doesn't have a lot to do as villain Ajax, lacking any kind of backstory or motivation, but then that's kind of the point. Stefan Kapičić turns in a great vocal performance as Colossus, whose role in this movie is to try to make Deadpool become a hero (mainly by boring him with unnecessarily long speeches), and Brianna Hildebrand brings the requisite teenage moodiness as Negasonic Teenage Warhead. Particularly well-cast is the Tony Award-winning, Emmy-nominated actress Leslie Uggams (noted for many prestigious film and stage roles in the 1960s and 1970s) as Blind Al, Deadpool's somewhat reluctant housemate. One performer who starts out brilliantly but then drops off (due to the script, not her) is Morena Baccarin (Firefly, Gotham, Homeland). Baccarin plays against type as a foul-mouthed escort who matches Wilson's verbal quippage and wins his heart, but ends the film reduced to a damsel in distress (a line lampshading this in the trailers is, slightly oddly, removed in the film), which is a bit disappointing.

What helps the film is its short running time, its focus on a relatively straightforward story and the clarity of the stakes. Alongside last year's Mad Max: Fury Road and Ant-Man, it certainly makes another argument for action movies where the scale is more personal and the fate of the whole world is not at stake. It is certainly a vast improvement over the leaden and overblown pomp of films like Age of Ultron and Man of Steel.

Deadpool (****½) is fast-paced, well-written and tremendously well-characterised. It's a funny movie but doesn't rely on just being funny, remembering to bring heart, satire and thunderous action as well. It is, in a rather bizarre way, charming under all the filthy one-liners and sexual references. It is on general release right now, and a sequel has already been greenlit.
Posted by Adam Whitehead at 11:37