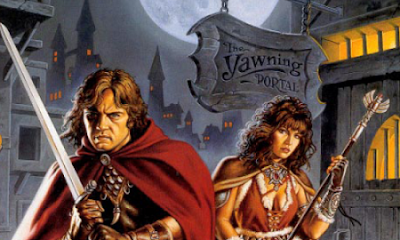 Warner Brothers secured a deal last year with Sweetpea Entertainment and Hasbro/Wizards of the Coast (who were in litigation over the Dungeons and Dragons film rights) to end a legal dispute and start work on a film set in the Forgotten Realms world. There were indications that Warner Brothers wanted to fast-track the movie, seeing a ready-made opportunity to develop a shared universe akin to the Marvel or DC movies.

Producer Roy Lee confirmed that the long-term plan is to develop films based on several of the Dungeons and Dragons worlds, not just stay in the Forgotten Realms. Other D&D worlds they may consider visiting include the blasted, post-apocalyptic Dark Sun; the epic, dragon-centric Dragonlance; the cosmic, bizarre Planescape; and the old-skool, traditional Greyhawk. Other candidates may include the steampunk Eberron, the horror-tinged Ravenloft or the Game of Thrones-esqe (but note it predated the books) Birthright.

David Leslie Johnson has written the script, which according to Lee is aiming for Guardians of the Galaxy, more light-hearted tone than other fantasy movies. Lee also confirmed that the film will feature the Yawning Portal Inn, which means that the great, iconic city of Waterdeep will feature in the movie.

It sounds like Warner Brothers are keen to move on with the project, especially given the substantial amount of money they spent on sorting out the legal mess and bringing the warring parties together. However, the one fly in the ointment may be the WarCraft movie, which is released on 10 June. If the movie does badly, it may force other studios to reconsider their fantasy options. However, it is not believed that the D&D movie will have as large a budget as WarCraft or will be so dependent on elaborate effects.
Posted by Adam Whitehead at 22:14