Miles Vorkosigan is enjoying his honeymoon...right up to the point that he is diverted to Graf Station in Quaddiespace to sort out a diplomatic mess involving Barrayaran warships, Komarran transports and some missing personnel. What initially appears to be a straightforward mission rapidly escalates into a major incident that threatens to break out into full-scale war. 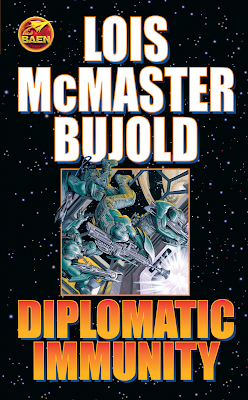 After several novels in a row concerned primarily with Miles Vorkosigan's character development, Diplomatic Immunity sees Lois McMaster Bujold returning to something of a more "normal" approach for the series. She sets up a series of interconnecting mysteries built around some interesting SF ideas and then sets Miles loose to investigate and resolve the situation with a (relative) minimum of fuss. This time around Miles is accompanied by his wife, Ekaterin, and reunited with one of his old Dendarii compatriots, but for the most part it's Miles doing what Miles does best: fast-talking, quick-thinking and having a lot of fun in the process.

The novel is also a bit of a sequel to one of Bujold's earlier novels, Falling Free, which is set in the Vorkosigan universe but is not part of the core series. That book explored the development of the quaddies, humans genetically engineered to best exploit freefall by being given an extra pair of arms and hands instead of legs. Diplomatic Immunity also catches up with the quaddies and reveals what has become of their society in the  intervening two centuries (Falling Free accompanies Diplomatic Immunity in the omnibus edition).

The book is standard fare for Bujold and Miles: well-written, with some clever ideas, some unexpected twists (the escalation of the situation from a minor drama to a massive diplomatic incident is sudden but convincing) and some nice work in terms of both characterisation and plot. It's a smart novel, although it is a little too reliant on coincidences. We are told repeatedly how obscure, bizarre and off the beaten track Graf Station is, so Miles running into two people he's met in previous adventures purely by chance is a little hard to swallow. Once you move past that, it becomes a more interesting story combining mystery, action and politics.

If Diplomatic Immunity does have a major flaw, it's that it feels a little slight in terms of Miles's own character development in the wake of Mirror Dance, Memory, Komarr and A Civil Campaign. But after a whole series of traumas, it is also kind of fun to see Miels not being put through the emotional or physical wringer so much and just getting on with his job.

Diplomatic Immunity (****) is a fun, enjoyable addition to The Vorkosigan Saga. It is available now as part of the Miles, Mutants and Microbes omnibus (UK, USA).
Posted by Adam Whitehead at 17:54