Veteran science fiction and horror actor Tony Todd is apparently being considered for a role on the new Star Trek TV series from CBS. 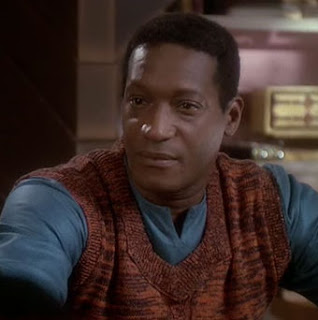 Tony Todd as the adult Jake Sisko in the Deep Space Nine episode The Visitor, which aired in 1995.

Tony Todd rose to fame playing the title character in the Candyman movies, but in the 1990s got involved in the Star Trek franchise. He is most famous in that franchise for playing the role of Commander Kurn of the Klingon Defence Forces, Lt. Worf's younger brother. He appeared in that role in four episodes: Sins of the Father (Season 3), Redemption (Season 4) and Redemption, Part II (Season 5) for The Next Generation and Sons of Mogh (Season 4) for Deep Space Nine. He also played two other characters: a far-future, adult version of Jake Sisko in DS9's The Visitor (Season 4) and the Alpha Hirogen in Star Trek: Voyager's Prey (Season 4).

Having played three different roles on three Trek series set in the same universe, Todd's possible return does not mean that the new series will definitely take place in the original continuity rather than the revamped canon of the J.J. Abrams movies. It's also unclear if Todd is being considered for a recurring role or a series regular.

The new Star Trek series will debut on CBS with following episodes to be released CBS's on-demand digital service. Bryan Fuller and Alex Kurtzman will be producing the new series, expected to debut in January 2017.
Posted by Adam Whitehead at 16:52

If he is indeed cast, this would be excellent news. Todd made a considerable impact on Star Trek lore with just a handful of appearances.