On 4 February 2009 I reviewed the fifth season of The Wire. I recently completed rewatching the season thanks to the recent HD re-release, courtesy of HBO, and here's the original review with some updated thoughts. 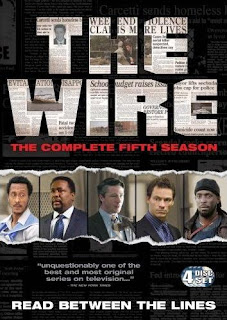 The fifth and final season of The Wire is given the task of wrapping up all the loose ends from previous seasons and also to give space to a new storyline element, that of the media. With the police, criminals, politicians, working class and teachers already covered, moving into the newspapers is the logical next port of call, especially since many of the show's writers cut their teeth as journalists at one time or another.

Thanks to the efforts of the ever-redoubtable defence attorney Maurice Levy, Marlo Stanfield and his crew have avoided jail time, despite being linked to 22 bodies discovered in vacant housing in Baltimore. New mayor Tommy Carcetti wants the murders solved, so the Major Crimes Unit has been reconstituted with most of the old team back in play: Kima, Freamon, McNulty and Sydnor. Meanwhile, Herc has been forced to leave the police and is now working for Levy as a private investigator, and Omar is enjoying a holiday life down in the Caribbean, having apparently left behind the game for good. Unfortunately, Carcetti has inherited a massive education budget deficit from his predecessor and is forced to divert substantial financial resources away from the police to the schools. The Major Crimes Unit is disbanded, and even the street cops find their vehicle maintenance funding being pulled. With the police off his back, Marlo's consolidation of control over the city's drug trade suddenly ramps up to a new and dangerous level and he vows to settle his score with Omar.

With bodies dropping but no funds available to investigate them, McNulty comes up with a scheme to get attention and resources back to the police force but, needless to say, it backfires spectacularly. At the same time, the Baltimore Sun is facing cutbacks but an ambitious young reporter, Scott Templeton, finds unorthodox means of finding new stories that please the bosses but annoy his editor.

The final season of The Wire has a lot of ground to cover, as the police force's attempts to take down Marlo hit a brick wall and a new case rapidly rises to prominence, whilst a whole new facet of the city is explored through the newspaper. Simultaneously, many subplots running from the previous season continue to be explored, such as the continuing trials of the former schoolchildren from Prez's class (although only Dukie and Michael have a lot of screen time this season, Namond and Randy being reduced to cameos) and Marlo's attempt to dispose of the last barrier between him and total control of the city's drug trade. As a result a lot of other storylines fall behind. Carver and Herc appear a lot less than before (although when they do appear, they have some important things to contribute to the show's ending), Prez only has a brief cameo and the school storyline is pretty much abandoned. Cutty also only has a brief appearance, although given that his rehabilitation arc through Seasons 3 and 4 is pretty much complete that is more understandable.

The name of the game this year is resolution. McNulty and Freamon are out for Marlo's blood and plan to bring down his organisation and put him in jail at any cost, and the extraordinary (and increasingly illegal) lengths they go to achieve that are breathtaking. Having played the system for four seasons prior without much to show for it, the two police officers are at breaking point, which isn't surprising. We also see Carcetti, the wonder boy who wanted clean stats and a new dawn for his city, being driven down by the system into the same morass of murky compromises and grey morality that blighted his predecessor. The newspaper storyline is nicely handled, and encapsulates the idea of people trying to do the right thing and getting beaten back for it whilst those who ride and exploit the system can succeed. It's a very cynical view of the world, although one that seems to be depressingly backed up by reality.

But inbetween the cracks there are rays of light. Michael has been put through the wringer in the show's last two seasons and done some very bad things, but towards the end he comes to the realisation that he is in the game but not a gang player, which leads to a very logical end point for him, whilst Bubbles' traumas over the years finally lead him down the path of redemption. It would have been easy for the writers to have had Bubbles rehabilitate at the end of Season 1, but making his journey much longer and more painful before the possibility of a happy ending presents itself results in a more satisfying resolution.

The series ends by showing us the hard-won victories the forces of law and order have achieved, but elsewhere many of the villains are still at large with blood on their hands. Some of the 'good guys' are left broken, or homeless, or without their jobs, or as drug addicts. But some people get what's coming to them, and the series ends with a long, lingering shot of Baltimore, a crime-addled, bankrupt city where the people are just struggling to survive day by day. It was this city, which stands in for pretty much any city in America, that was the real star of the show. David Simon and his writers, directors and actors are to be commended by giving us the definitive portrait of the American city in the 21st Century, and that portrait is not a positive or a happy one. But it has a ring of truth and authenticity to it that no other cop or lawyer show has ever achieved.

Season 5 of the The Wire (*****) is a fitting end-point to the series, and a fine capstone to one of the greatest TV shows of all time. Storylines and mysteries stretching back to Season 1 are resolved satisfyingly, but no easy answers are given and the ending is anything but neat. The season is available on DVD in the UK and USA, and as part of the complete series box set (UK, USA). 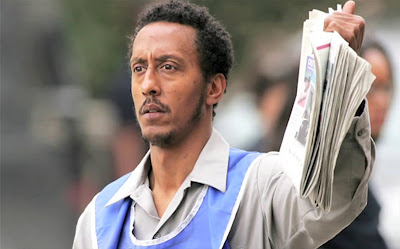 Which is not to say that it is bad, but for the first time in the series it feels like David Simon doesn't really have a lot to say. The decline of print media and well-paid, driven reporters is bad for journalism? Hardly a major revelation. The bosses become the bosses due to a bland willing to compromise and sell out their ideals in the process? The previous four seasons said the same thing and in a much better way. The fifth season doesn't bring much that's new to the table and the newspaper storyline, particularly the bizarre activities of Scott Templeton (who on this rewatch now appears to be mentally ill rather than simultaneously ambitious and lazy, which I think was the original intent), is not really well thought-out. Not to mention that the police storyline, where McNulty crosses the line to secure more funding for the police department, is implausible to the point of being farcical. For a show so steeped in criminal and social realism, these aspects of the fifth season feel unconvincing and even contrived.

Fortunately the show is about much more than that. The war on the street between Marlo Stanfield and Omar is absolutely gripping, driven by fantastic performances and an escalating level of violence and rising stakes that is compelling. Carcetti's decline in moral authority and ability as he loses his earlier idealism and capitalises on disastrous crime and and school issues to try to get into the governor's mansion is also phenomenal, Aiden Gillen bringing all of the snake-oil charm, political nous and wafer-thin charisma that he doesn't to the role of Littlefinger in Game of Thrones (seriously, what is up with that?). Other elements are much reduced this year, with characters like Prez and Cutty being reduced to cameos, but others return to prominence, such as the return of the Greek and his gang from the second season.

When The Wire hits the right notes, even in this more problematic final season, it more than earns its title of the Best TV Show Evaaaah. At its best, the writing and casting and direction are sublime. At its worst, the show loses focus and becomes just another crime show, but still a well-made one. Fortunately, the cast and crew do manage to turn around the moderate decline in quality in the last two episodes of the series and bring things together for an absolutely outstanding finale that really encapsulates what the show is about.

The Wire complete series blu-ray set is available now in the UK and USA and, for anyone who enjoys good drama and good television, is an absolute must-purchase.
Posted by Adam Whitehead at 12:21

I have tried to get into this show, but I can't do it. Too boring...

The 5th Season is the weakest. Both the newspaper and the homeless-serial-killer plots are weak. The newspaper plotline suffers I think from hitting a little too close to home for Simon. It's one of the very few times the show steps away from realism and serving as an impartial observer to adopt a more moralizing tone.

The ending, though, is one of the best ever in TV, and completely in keeping with the overall theme of the show.