The new Star Trek series has found its showrunner: Bryan Fuller, the man behind Pushing Daisies, Hannibal and the best episodes of Heroes, will produce the new series for CBS. 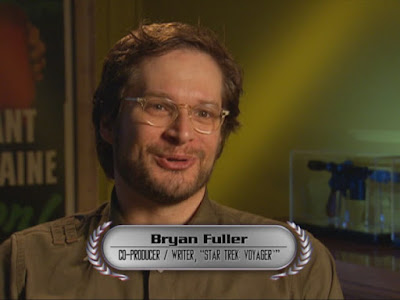 After writing two episodes of Star Trek: Deep Space Nine in 1997, Fuller transferred to Voyager and had writer and producer credits on eighty-one of the show's 172 episodes.

It marks a return to his roots for Fuller, who started his writing career with two scripts (The Darkness and the Light and Empok Nor) for Star Trek: Deep Space Nine's fifth season in 1997 before joining the writing staff on Star Trek: Voyager. After Voyager ended in 2001 he created and wrote the short-lived but critically-acclaimed series Dead Like Me and Wonderfalls before joining the writing team on Heroes. He was credited for several of the best episodes of the series' first season (most notably Company Man). He left after the first season to produce the well-received Pushing Daisies, but returned for several episodes of the third. His most recent project was the critically acclaimed Hannibal.

Fuller will be mixing his duties on Star Trek with producing and showrunning American Gods for Starz. Fuller has several times mused on how to revive Star Trek, discussing both a Next Generation set in the Abramsverse (from the new movies) and a series set on the USS Reliant, the ill-fated Miranda-class starship from Star trek II: The Wrath of Khan. Fuller has been dismissive of the direction the franchise took in its later days on television, indicating that a return to the "Prime Universe" of the original TV series is less likely under his stewardship. However, as the "Abramsverse" is legally owned by Paramount, it is unclear if CBS would be able to use it at all for their new project.

The new Star Trek project is expected to air a pilot episode on CBS in early 2017, with subsequent episodes to bizarrely air exclusively on CBS's digital platform.
Posted by Adam Whitehead at 18:24

Well now, if that doesn't kill what little excitement I had for this.

Forget about "Prime Universe" or "Abramsverse". Just make sure it doesn't suck. That's should be the prime directive to these guys. Which universe it is set in is secondary if at that. Hell, leave that question open-ended for all I care; just make sure it's a good show.

Who cares for Prime Universe or Altered Universe or whatever? The only thing that should matter is that Bryan and his team be allowed to make a show with great cast and great stories. I am as die-hard a fan as you can get, but at the end of the day quality is what I sign up for, not some arbitrary concept of decades-old canon.