The Star Trek franchise turns fifty this year. The first transmitted episode of the original series, The Man Trap, was aired on NBC on 8 September 1966. Since then, Star Trek has gone on to become one of the dominant science fiction franchises of all time, competing only with Star Wars and Doctor Who. To date, Star Trek has spanned 723 episodes over six television series, thirteen feature films, over sixty video games and over 600 books.

Star Trek's success is extraordinary, which is all the more puzzling why it has been treated so badly recently. In 2004 the sixth Star Trek TV series, Enterprise finished after four seasons due to disappointing ratings and a "mixed" critical reception. This was two years after the tenth Star Trek movie, Nemesis (2002), had proved to be a critical and commercial failure. The feeling was that the audience had become over-saturated with Star Trek; since 1987 no less than 25 seasons of Star Trek had aired on television, accompanied by six movies. "Franchise fatigue" was blamed by executive producer Rick Berman for the declining interest in Trek. However, others suggested other reasons: the rise of "grittier" and more adult SF franchises like Firefly (2002) and the rebooted Battlestar Galactica (2003-09) made Star Trek look increasingly tired and quaint. The new BSG's critical success was particularly notable since it was produced and written by ex-Star Trek writers unhappy with the direction of the franchise post-Deep Space Nine. At the same time, the StarGate franchise - spanning three TV series airing between 1997 and 2011 - had won a loyal fanbase for its greater use of self-aware humour and serialisation.

Whatever the reason, "resting" Star Trek for a few years was generally regarded as a good move, allowing fresh creative voices to come on board and for the franchise to eventually be relaunched. This happened in 2009, when director J.J. Abrams helmed a reboot of the series by creating a parallel timeline with new actors playing younger versions of the classic crew of Kirk, Spock, Dr. McCoy and so on. The new film, simply called Star Trek, was a reasonable box office success ($385 million worldwide) and was critically warmly received. Its sequel, Into Darkness (2013), was an even bigger worldwide box office success ($467 million) but revenues were down in the American market on its predecessor and the film faced a much rougher ride from critics. These factors led to a budget cut for the third movie, Beyond, due for release this year.

The caution Paramount is showing over the reboot franchise is surprising, given that the films have made reasonably good profits, but it is a sign that Paramount wanted and expected a lot more from the franchise. They wanted them to break out and be massive hits in the $1 billion range, allowing Star Trek to compete as a franchise with the Marvel movies and the likes of Transformers. In particular, the film's underperformance (if only in their view) versus the absolute barnstorming success of J.J. Abrams's Star Wars movie, The Force Awakens ($2.05 billion and rising) has to particularly grate, as Abrams jumped ship on the Trek franchise to help relaunch Star Wars.

This caution has extended to the new Star Trek TV series. CBS has announced that the seventh TV series will debut on the main CBS channel in January 2017 before transferring to CBS's on-demand streaming service. The series will not be available - at least initially - on more widespread platforms like Netflix, Amazon Prime or Hulu. CBS hopes that Star Trek's draw will inspire more people to sign up to their platform. However, the move has been widely criticised as both limiting the available audience for the show and also as being disrespectful of the franchise and its fans in its 50th anniversary year, demanding that fans of the series shell out a lot more money to be able to see new episodes. A new Star Trek show should, it has been argued, be a big-budget show launched on CBS's main channel with a blaze of publicity to celebrate the anniversary. Instead, it is being sneaked out the back gate and awareness of the new series seems to be verging on the non-existent, only ten months out from transmission. 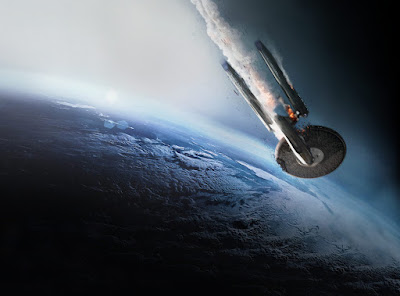 Star Trek Into Darkness is the odd case of a profitable movie which the studio nevertheless regarded as a commercial disappointment, and seems to have resulted in plans for more films and TV shows to be scaled back.

The two issues seem to be related - the film franchise's relative underperformance has probably impacted the new TV show's low-key profile - although they really shouldn't be. Star Trek is and always has been, first and foremost, a franchise that worked best on televisions. Its iconic characters grew and developed over dozens of hours of weekly episodes. The films came about due to a desire to cash in on the success of the original Star Wars and the reluctance of the original actors to commit full-time to another series. However, the huge success of The Next Generation and (somewhat more modestly) Deep Space Nine showed that the franchise worked best on TV. The problem with the latter two TV series, Voyager and Enterprise, beyond simple creative exhaustion and the aforementioned franchise fatigue, was that they became too derivative and too faithful in sticking to tried-and-tested storylines rather than shaking the paradigm up as Deep Space Nine had. The failure of Voyager to deliver on its promise to show an increasingly broken-down ship on the edge of the frontier with a crew driven to desperation drove veteran Star Trek writer-producer Ronald D. Moore to work on Battlestar Galactica instead, and that series has often been described as being how Voyager should have been, at least aesthetically.

However, there is also another fundamental issue. Star Trek has always positioned itself as the most optimistic of the major SF franchises. It postulates that, 300-400 years from now, we have not destroyed ourselves but have instead overcome war, plague and environmental catastrophe to form an interstellar alliance of like-minded worlds, primarily concerned with exploration and scientific research. Where hostile enemies and violence forces are encountered, they have to be fought and defended against, but diplomacy and negotiation are preferred. The only times the Federation really does have to resort to violence and military action is when confronted by an unstoppable force like the Borg or the insidious threat of an "anti-Federation" willing to turn its own tactics against it, the Dominion. Even in these cases, the corrosive effects of war (even if justified) are examined.

The prevailing mood in recent science fiction has been considerably more dystopian. Battlestar Galactica presented the aftermath of a genocide, the deaths of 20 billion innocent people and the reduction of the human race to just 50,000 souls fleeing on a ragtag bunch of increasingly unspaceworthy ships. SyFy's The Expanse depicts a more "realistic" view of the future, with exploited miners and workers in the asteroid belt being screwed over by the rich rulers of Earth and Mars. The currents elsewhere in popular entertainment are also dark: The Walking Dead's nihilism, Game of Thrones's cynicism and violence, House of Cards's political corruption and the state paranoia of The X-Files relaunch all paint a much bleaker portrait of humanity.

If the new TV series will attempt to recapture the optimism that is at the heart of Star Trek (and was notably missing from Into Darkness) or whether it will take the easier route of channelling violence, action and explosions remains to be seen. However, the decision to employ Bryan Fuller and Nicholas Meyer is a hopeful one. Both are accomplished writers with a reasonable amount of Trek experience, and both are good at examining the darker side of human nature whilst maintaining an optimistic outlook that is respectful of where Star Trek has come from. Deep Space Nine also provides an excellent model of a serialised, intelligent show with more violence and darker moments than any of the other series but also retains the core Trek morals of optimism, progress and hope. If the new show can hit the same notes as DS9 and The Wrath of Khan, it may be just the show of energy the franchise and the genre needs. Come January, a small number of CBS subscribers will find out.
Posted by Adam Whitehead at 18:15

I find the Stargate TV show interesting because it's essentially Star Trek with a few tweaks. Its basic story structure is Star Trek - a small team goes to an isolated planet, gets involved in a local conflict, and resolves it before returning home to the status quo. Its ethics is also Star Trek in that the protagonists go to extreme lengths, even going against their commanders, to make certain that their problems are solved in a morally upright fashion. In fact that moral aspect of the show is rather jarring when one considers that the leader of the team is a black ops Special Forces soldier who was active during the Cold War. I mean, the man probably trained Contras in Nicaragua. Not that I think it's impossible for members of the US military or government to be moral, but realistically speaking, the US would have been okay with harbouring space fascists in exchange for space technology. That's just one example from the show and one that even has a real world parallel in Operation Paperclip. I suppose what I'm saying is that I can't quite suspend my disbelief. I can believe that the Federation can be an upright institution but I can't quite accept that the US military would be so understanding.

Though having said that, Stargate's similarity to Star Trek in this aspect does rather put paid to the idea that optimism was inherently a turn off in the 21st century. The United States is actually a force for good in this show - what is a more optimistic and fantastical idea than that?

Hoping that CBS are so happy with the final product that they'll relent and air it all on CBS. Perhaps with an exclusive online only period for a week before or something like that. The business model probably isn't going to affect us in the international market but don't want it to influence the series viability by not doing the numbers they expect when nothing would. Creatively it all looks promising.

Well, based on this reasoning, the new series should be based either on WWIII directly, or its aftermath, possibly featuring Cochrane and Lily directly. That could be interesting, kind of like Smallville and Gotham, "before the story" storytelling.