The most metal deaths in Middle-earth

J.R.R. Tolkien is seen these days as a bit old-fashioned, maybe even a bit twee. But mainly by people who haven't read him. Those who have, particularly The Silmarillion, know that the Tolks was happy to murder his way through his cast of characters with a wild abandon that even George R.R. Martin might think is a bit much. 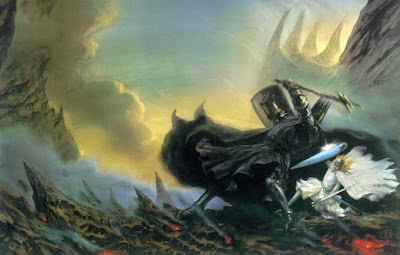 Fingolfin battles Morgoth shortly after the Battle of Sudden Flame, in the First Age of Middle-earth.

Some of those deaths were tragic. Some were epic. Some were heroic. But the question everyone needs answered is: which were the most metal deaths. The Toast has you covered here.
Posted by Adam Whitehead at 11:13

Email ThisBlogThis!Share to TwitterShare to FacebookShare to Pinterest
Labels: j.r.r. tolkien, metal, the lord of the rings, the silmarillion