J.K. Rowling has announced that her forthcoming Harry Potter stage play, Harry Potter and the Cursed Child, will be published as a scriptbook. Co-written with Jack Thorne and John Tiffany, the book will be released in the summer shortly after the play debuts in London on 30 July. 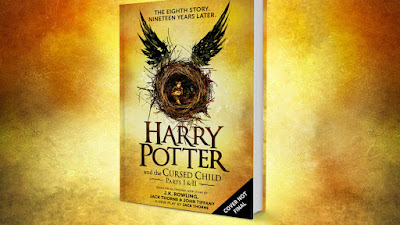 The play - and the book - are being billed as the eighth part of the Harry Potter saga, picking up nineteen years after the events in Harry Potter and the Deathly Hallows. The story begins shortly after the epilogue to Deathly Hallows, where the now-adult Harry and his youngest son Albus Severus Potter are struggling with the legacy of Harry's previous adventures.

This year will also see the release of Fantastic Beasts and Where to Find Them, the first of three films serving as a prequel to the Harry Potter saga. Starring Eddie Redmayne, the film is set in the United States in 1926 and explores what happens when Newt Scamander (Redmayne) inadvertently releases a group of magical creatures into New York City, straining relations between the wizarding community and the No-Maj (the American term for "Muggle") majority. The film is due for release on 18 November.
Posted by Adam Whitehead at 16:08

It's a publication of the rehearsal script or something, so it won't be a 'novel' but you'll be reading the SCRIPT (so "...enters from stage left." etc.)

Yes, that's why I say it's the scriptbook. It's actually a handy way of getting the story out to people who won't be able to see the play itself, although I suspect we'll see a released performance on DVD/Blu-Ray, probably followed by a movie version (perhaps allow a few years for Daniel Radcliffe to get closer to the actual age) and maybe a full novelisation.