The threat to the Confederation from the 'reality dysfunction' is growing. Anxious to show that the pervasive threat can be neutralised, the Kulu Kingdom have joined forces with their oldest rivals, the Edenists, to liberate the peninsular of Mortonridge on Ombey from the enemy. However, the conditions they encounter mean warfare the likes of which humanity has not experienced for seven centuries. 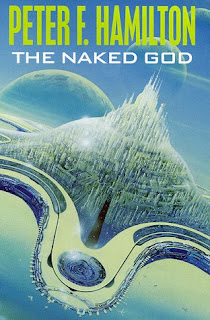 Meanwhile, the nefarious 'Organization' has proven extremely effective in spreading the contamination to other worlds, keeping the Confederation Navy on the back foot. The habitat Valisk has vanished from the universe, but the survivors on board are soon to discover that their hoped-for sanctuary is anything but benign.

Quinn Dexter has penetrated Earth's defences and is now trying to destroy the great arcologies, forcing Govcentral's intelligence service into desperate measures to contain his threat, including making use Louise Kavanagh to draw him out. Meanwhile, Joshua Calvert and Syrinx are convinced to join forces to take their starships on a mission to the far side of the Orion Nebula, to the long-deserted Tyrathca homeworld, where they hope to find records leading them to an artifact the Tyrathca believe can resolve the crisis once and for all...

As well as being the final novel in the colossal Night's Dawn Trilogy, The Naked God is probably the single largest science fiction novel ever written (excluding Atlas Shrugged, depending on if you want to argue that as SF or not), coming in at an eye-watering 1,150 pages in length. In hardcover. That's 200 pages longer even than its two huge forebears, and it has to be said the flagging pace of the book probably owes a lot to that fact.

That said, The Naked God carries on the storylines left hanging at the end of The Neutronium Alchemist without interruption and, to use a rather lazy reviewing phrase, if you enjoyed the first two books I suspect you'll also enjoy the third. Numerous plot threads are in motion, and Hamilton deftly moves us between New California, Ombey, Valisk, Norfolk, Tranquillity, Earth, Trafalgar and other worlds with confidence and ease. However, he also has to time all his story threads to converge at the same point, which results in a number of middling problems contributing to the book's great length. Most notably, there's a discernible amount of filler in this book. Whilst it's great to finally get a detailed look at the ecologically devastated Earth with its population squeezed into immense domed cities, seeing Louise check into a hotel and get some neural nanonics does slow down the story at the exact moment it should really be gearing up for a thunderous climax. Instead, the story jumps around haphazardly, with an inordinate amount of chapters for the Valisk story given that very little happens in it but not much coverage at all of Joshua and Syrinx's mission, which should really be the dominant plot thread of the novel. Also, whilst an effective antagonist in the first two novels, Quinn Dexter's over-the-top villainy in this third volume does reduce him to a bit of a cartoon figure whom it is hard to take seriously. Hamilton should really not have given him the superpowers he did at the end of Book 2 (including virtual indestructibility), as they make his chapters somewhat tiresome. Indestructible characters, good or bad, make for dull reading. 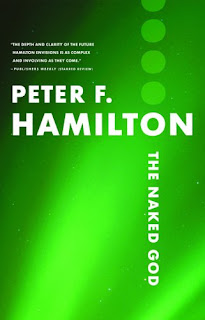 Elsewhere, the book is as well-written as the rest of the trilogy has been, with a welcome strong return for the horror elements present in Book 1 but largely missing from the second book. There are also more big battles in space and on land, and a strong philosophical streak running through the book about the morality and application of warfare. Hamilton definitely seems to be having fun tweaking the noses of his American space opera counterparts, who all too readily resort to solving their problems with lasers and nukes, whilst he gets his characters to think their way out of their problems instead (although sometimes with the odd maser barrage as well, just to keep things colourful). There's also some nice ideas about consequences and choices and responsibility, although given the number of people moaning that the book and the ultimate solution to the reality dysfunction crisis doesn't involve a fusillade of antimatter explosions, perhaps this doesn't get across to the reader entirely successfully. Most notably, Hamilton has said the trilogy should have been called Joshua's Progress, as it is his (well-handled) character evolution and development which brings him to the point where a solution to the crisis can be found. Unfortunately, in The Naked God Joshua actually takes a bit of a back-seat to proceedings and is merely one among many, many POV characters, meaning his sudden importance to the plot in the final chapter is rather jarring.

There's some excellent characterisation in the book. As well as Joshua, characters like beleaguered General Ralph Hiltch and Louise also develop in interesting and unforeseen ways. As with the previous book it does feel like Dariat and the Valisk story are somewhat superfluous, with their actual contributions to the overall plot (the hellhawks in Book 2 and the melange - not the Dune kind - in Book 3) not really justifying the immense length of their narrative.

That brings us to the ending, which on one level is epic, cosmic and genuinely impressive. It is also rather too neat, and Hamilton is probably a little bit too exacting in detailing 'what happened next' to the characters, right down to a minor car thief arrested at the start of Book 2 (although that bit is quite funny). It isn't a totally perfect ending, and he does leave one huge 'plot bomb' waiting to explode which could be followed up on in future books, but in this age where slightly more ambiguous endings are all the rage Night's Dawn does feel like it dots all the 'i's and crosses all the 't's a little too pedantically. Also, whilst the ending isn't a deus ex machina at all, it is certainly brought about by a plot device, which some readers have found anti-climatic. I found it worked quite well.

The Naked God (****) is the weakest book in The Night's Dawn Trilogy, as conclusions often are, but it is still mostly well-written and characterised, with fun action sequences and an impressively thoughtful air to proceedings that will hopefully get the reader to think about some of the issues raised. The book is available now in the UK and USA.

What, not more Hamilton or Prachett? :P

I'm pretty disappointed in the score, considering I'm 250 pages into the first book and loving it. Though I guess people didn't like Judas Unchained very much, whereas I couldn't really tell any difference.

4/5 is still a very good score. It's a monstrously huge book and this was my fourth time reading it, and I still got through it in about five days, which is pretty good going.

If you like the first book I suspect you'll like all three, but there is something of a drop-off in quality.

I do want to reread Hamilton's Greg Mandel and Commonwealth books, but I've put those back until next year. I think I may have ODed on Pratchett and that may have contributed to the less impressed reaction with MOVING PICTURES and REAPER MAN. I want to have a bit of a break before jumping back into the fray there.

Plus I keep bumping into Robert Holdstock at publishing events and it's getting ridiculous that I haven't read his books yet :-)

I'll admit to not knowing Holdstock's works, so I did a search.

What I turned up was a book called 'Merlin's Wand' and a cover that looks like this: http://upload.wikimedia.org/wikipedia/en/5/55/TheFetch.jpg

What's the huge plot bomb? I think I missed that when I read it.

The exposure of the Tyrathca's belligerent nature, and what they might do after the outbreak of hostilities. True, the end of the trilogy means the Confederation has been rendered safe from them in the short-term, but in the long-term it is a problem they have to deal with. I think PFH has said it would form the basis of any future sequel/continuation, but I wonder if it would be too similar to the Prime threat from Pandora's Star, so he's dropped it.

I'd love to know how you justify the resolution of this book being anything other than an [i]archetypal[/i] deus ex machina. It pretty much ruined the entire series for me. I've never revisited Night's Dawn after I had the end of the Naked God inflicted upon me.

Haven't revisited this thread in some time, but still:

A deus ex machina is where a previously unrevealed, unsupported and unsubstantiated plot element is introduced that resolves the story very quickly and everyone can go home for tea and crumpets with no consequences.

In the case of THE NIGHT'S DAWN TRILOGY, the agency which can provide the ultimate solution to the crisis is revealed in Book 1, expanded on in Book 2 and the search for that agency forms the basis for one of the main storylines of Book 3. Upon discovering that agency, it is able to resolve the crisis, as it was revealed it could around 3/4 of the way through Book 1. However, the consequences of the crisis are not handwaved away. Billions are still dead, billions more are injured or severely traumatised and the humance race has been dealt a metaphysical shock to which it will take decades to adjust.

The Sleeping God is a blatant plot device, but it is not a deus ex machina by any definition. I just hope that those who moan incessantly about it likewise go off and bitch about how in LORD OF THE RINGS, after 1,100 pages of being told that Frodo has to go to Mordor and throw the One Ring into the volcano to solve the crisis, he then goes to Mordor and throws the One Ring into a volcano and solves the crisis.