When a Chaos fleet breaks through Imperial lines and heads for Adumbria, the Valhallan 597th (and its increasingly famous commissar, Ciaphas Cain) and several other regiments are rapidly mobilised to intercept them. On Adumbria - a world tidally locked to its star and characterised by burning deserts and freezing icy conditions - Cain and his troops are spread thin, so they must bolster the morale of the native Planetary Defence Force. Cain, as usual, decides to find a nice rear-echelon position where he can avoid most of the combat. Also as usual, his luck doesn't quite work out as he finds himself battling Chaos Marines, unearthing secretive cults and pitting his wits against a rival commissar out to ruin him. 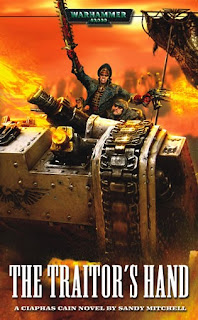 This third Ciaphas Cain novel sees the titular semi-hero once again thrust unwillingly into danger and adventure, and his every attempt to avoid it goes hideously wrong, once again leaving him festooned with medals and plaudits (despite the number of times that it his extremely smelly aide, Jurgen, who actually saves the day). The Traitor's Hand is a step-up from the claustrophobic, repetitive Caves of Ice by having Cain play a larger role in the defence of an entire planet from a Chaos army, with him moving from defending the capital to consulting the army's commanding officers to fighting in the field with his troops to storming enemy bases. It is with this book that the Flashman-in-space label starts to look even less appropriate, with Cain's reluctance to rush into the most dangerous places becoming less convincing (the occasional footnote interjection by Inquisitor Veil seems to agree with this) given the number of extremely hazardous scrapes he gets into here.

The book is well-paced, with a good mixture of humour (including the best bomb-defusing scene I've ever seen), action and character-building elements (the introduction of a nemesis for Cain within the commissariat is a nice touch). It's a busier and more impressive novel than its immediate predecessor, although it also arguably loses a little of the cynicism and cowardice that Cain is constantly trying to project as his heroics in this book become pretty bonkers (including spawning a cult that comes to worship Cain as a prophet and the Divine Will of the Emperor made flesh!).

The Traitor's Hand (****) is available now in the Ciaphas Cain: Hero of the Imperium omnibus in the UK and USA.
Posted by Adam Whitehead at 09:32

The cover reminds me of this image ;))

Hey Adam, do you ever read the Warhammer fantasy stuff? I was wondering if there was a series I should check out...