Empire in Black and Gold by Adrian Tchaikovsky

Thousands of years ago, the tribes of humanity were menaced by the giant insects that inhabited their world. Through means long forgotten, humanity bonded itself to the insects, taking on some of their attributes and abilities, becoming the kinden. They mastered the insects and then came to dominate the world. 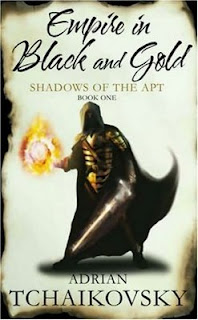 Now it is a time of invention and progress. The industrious Beetle-kinden have forged impressive vehicles and tools to drive their world into the industrial age, but they have no fear of war, for the city-states of the Lowlands thrive on their peaceful competition with one another. But, unknown to the Beetle-kinden, another people outside the Lowlands have no such restriction. The Wasp Empire, an empire painted in black-and-gold, is beginning its expansion into the Lowlands and only one Lowlander of influence, Stenwold Maker, artificer-turned-agent, is ready to stand against them. With only a small band of followers to assist him, Stenwold sets out to prevent the Wasps' latest conquest from proceeding.

Empire in Black and Gold is the first volume in Adrian Tchaikovsky's epic Shadows of the Apt sequence, a series currently projected to run to ten volumes (Book 6 is out in February 2011, followed by the seventh later in 2011). However, the series is divided into distinct acts which provide some sense of closure, with four volumes in the first act. I must admit that I was cautious over beginning another huge series, but I'm glad I took the plunge with this one. Empire in Black and Gold is a winner.

Tchaikovsky succeeds here in creating a world unlike most in secondary world fantasy. The mix of steampunk, traditional epic fantasy tropes, the echoes of real history (particularly the Lowlands resembling the Greek city-states of antiquity) and the use of the insect-kinden idea to make the races unique is very effective. These elements raise some interesting questions about slavery and racism (since in this world the different races, although all human, are differentiated from one another by their insect totems and have notably different traits). Tchaikovsky can't be faulted here on his worldbuilding, which is impressive, convincing and original.

On the character front, Tchaikovsky is also successful. Although the Wasp Empire is presented as the antagonists, individual Wasps are characterised as anything from indolent and corrupt rulers to efficient and loyal servants of their cause and ideology. Extremely well-realised is Thalric, an agent of the Empire's secret service, who is presented as 'the villain' but has his own, understandable motivation and driving force. His opposite number, Stenwold, also comes across well. Tchaikovsky captures the frustration of an old man past his prime who has been waiting for a long time for this conflict and now finds himself unable to fully confront it without the use of allies. 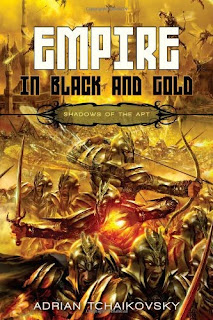 The primary POV characters are Stenwold's students, whom he has recruited into the fight: the engineer Totho, the industrious-but-unfortunately-named Cheerwell, the aristocratic swordsman Salma and the Spider-kinden swordswoman Tynisa. These are reasonably familiar character archetypes, but Tchaikovsky brings them to life convincingly, although Totho perhaps could have been developed a little more.

Prose-wise, Tchaikovsky goes for accessibility here, with an approachable and easy-to-read prose style reminiscent of say Brandon Sanderson. Despite the book's length (about 600 pages in paperback) it is a fast read.

On the negative side of things, some elements could have been explored in greater depth, such as the role of women within the Wasp Empire and more about the intriguing 'lightning engines', but then this is but the first volume in a long series and there's plenty of time for such elements to be brought into play later on.

Empire in Black and Gold (****) is a fast-paced, page-turning read set in a vivid, interesting and different type of fantasy world. It is available now in the UK and USA.
Posted by Adam Whitehead at 09:31

Email ThisBlogThis!Share to TwitterShare to FacebookShare to Pinterest
Labels: adrian tchaikovsky, empire in black and gold, shadows of the apt

The next book is probably the weakest in the series , after that it takes a massive leap in quality.
Blood of the Mantis , Salute the Dark and Scarab Path are fantastic books.

Heh, Dragonfly Falling is actually my favourite in the series so far, though Scarab Path comes close.
Also, gotta love those covers.

I liked Dragonfly Falling better than Blood of the Mantis, which is the weakest book for me. Salute the Dark is a very good conclusion to the "first sequence", and the Scarab Path reads as a standalone and is very good too. I already preordered the next book (can't remember the title).

I disagree about Dragonfly Falling as weakest, though I agree that Salute the Dark and Scarab Path are awesome books and as good as it gets in fantasy today.

For me Empire Black Gold was a bit dry and I think it is the weakest book of the series since it has lots of narrative walls and Dragonfly Falling improves there considerably though still has jarring transitions.

Blood of the Mantis is the first very well written (as style) book of the series, but it is too short.

Book 6 is THE SEA WATCH, 7 is HEIRS OF THE BLADE and 8 has the working title of THE AIR WAR.

By weakest I meant slightly lower is quality than the otheres, but still excellent. And yeah I think I was confusing Dragonfly with Blood of the Mantis.

Awesomely brilliant series, love every moment of it and pre-order all of them.