In definitely one of the more bizarre news stories I've heard for a while, Warner Brothers have acquired the rights to BBC kids' show Rentaghost and are developing it as a comedy vehicle for foppish British hanger-on Russell Brand. 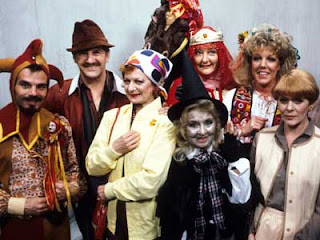 Rentaghost, a zero-budget children's show, ran for nine seasons from 1976 to 1984, was about a temp agency for the undead, who are hired out to help the living in various tasks. It wasn't particularly good (even as a five-year-old, I found it pretty crap), although the premise, if reworked, possibly has potential. However, with the notably untalented Russell Brand in it, the film probably won't be.

Next week: Christian Bale to star in Superted reboot.
Posted by Adam Whitehead at 12:04

Brand is fabulous, one of the most talented comedic actors alive. Don't like his public persona distract you from his acting ability.

He can't act to save his life and is extremely unfunny. Sorry, the guy is a tosser.

Rentaghost Rules! After all these years, people are still talking about it. Done correctly this could be a classic!

Have to agree with Adam there. Can't stand the guy.

That is one of the most bizarre bits of news I've heard for a long while...

Never heard of Rentaghost but have to agree that Brand is a bit of a tosser. Can't believe Katy "Mammarian Perfection" Perry married him.

Now Superted, that was a freakin' awesome show. Movie versions of that, Metal Mickey and Press Gang and I'm in heaven (how funny would it be to see Spike as a washed up reporter for a London rag?).